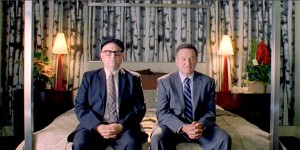 Bobcat Goldthwait, Robin Williams, fatherhood, hypocrisy, desperation, failure, mourning, autoerotic asphyxiation…What fresh swell is this? Nothing less than bracing, naughty goodness. Williams plays Lance Clayton, a failed Seattle high-school teacher (in a role not written for him, Goldthwaite reassures) whose wife has left him and teen son offs himself in embarrassing fashion. The rejected novelist tries to cover his embarrassment and to honor his late little Oedipus by penning a journal, a false memoir that becomes a sensation. Goldthwait showed rare, raw verve in  two earlier features, “Shakes the Clown” (1991) and “Sleeping Dogs Lie” (2006). The latter film’s original title was  “Stay,” and it centers on a woman struggling to keep her fiancée after confessing to a childhood coupling with the family dog. Four letters: perfect. Succinct, bold and prompts either a bark of a laugh or a cough of a giggle. Goldthwait makes moments like that, and I’m not just talking about the opening of “Shakes” that finds Florence Henderson as a clown morning-drunk on a bathroom floor, oblivious to what’s going on above her head. He’s expert in short, sharp comic shocks amid less-measured moments. Taking his longtime friend Robin Williams’ penchant for sentimentality and pulling it taut like a slingshot, Goldthwait captures the pure, thwarted egotism of a ghostwriter who cannot take credit for the vaunted words of his dead son, for his own fantastications of a boy who failed at everything but death. Tar black, the underlying satirical sentiments of “World’s Greatest Dad” are sweetly toxic. With Daryl Sabara as the slick of a son, Bruce Hornsby, Alexie Gilmore, Geoffrey Pierson, Henry Simmons, Mitzi McCall, Tom Kenny, Toby Huss. 99m. (Ray Pride)