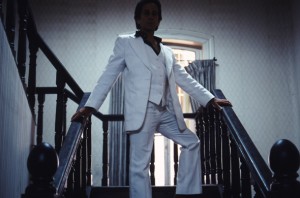 In Pablo Larraín’s inexorable, insistent nightmare, “Tony Manero,” we are cast into four grimy nights and days of a middle-aged man, Raúl Peralta, who has the countenance of a grave-robber and the pallor of a ghoul. The 52-year-old Raúl, played by co-writer Alfredo Castro without a speck of vanity and with charismatic unpleasantness, lives in Chile in 1978 during the authoritarian military regime of Augusto Pinochet. He’s found a place to transfer his frustrations, this man who seems thoroughly unengaged with the world, with people around him: a movie. The movie? “Saturday Night Fever.”

The grainy, fluorescence-washed 16mm images suggest the texture of 1970s American movies, including John Avildsen’s 1977 concoction of social class and sexual strut (based on Nik Cohn’s New York magazine cover story). Sometimes the violence of the tribal rites of “Saturday Night Fever” are forgotten for John Travolta’s white suit and dance moves, but that’s the coin of Larraín’s movie, which played the 2008 New York Film Festival, among others. Rather than merely displacing feelings of being an outsider from the lower class, of establishing masculinity through sexual display, Raúl is also an active sociopath who can’t stand any sort of frustration, cowering only at the intermittent appearance of armed, uniformed men in the streets, darting behind facades or into alleyways. The effect is studied, but understated. The neo-documentary camera style skitters and dashes in paranoid fashion, but also suggests the intimacy in nonfiction filmmaking of its time: a film that uses a Hollywood fantasy, but told as if it were a political documentary shot in the style of its history moment.

Are the ranks of men he shies from who commit the crimes and executions under the dictator any more or less masculine than this small man and his pop-culture fantasy? The effect of Larraín’s urgent, largely hand-held study of ignominy (with the director working as his own camera operator) is too immediate to be swamped by the allegorical burden. And Castro’s appearance and performance are a paragon of storytelling shorthand: the sallow man with the terrible skin and the angry eyes in the unfortunate Tony Manero carapace immediately indicates the crumminess of the fairytale we’ve fallen into. American culture, like American economic ideas, is crudely grafted onto the Chilean psyche. More than one sort of oppression is implied in Larraín’s shorthand.

Walking down the street in his own uniform, his battered white Travolta suit, Raúl imagines himself as a South American incarnation of Travolta’s Tony Manero, a gleaming paragon of manliness. He’s a paragon of fascist distraction: anything that fails to live up to his impossible, cruel ideals sets him off. His attempts at sexual gratification are mortifying failures. You think you know what bad sex looks like? Think again.

The sound of the Bee Gees is the only positive constant in Raúl’s head. He attends showings of the movie again and again, becoming fixed on the idea of choreographing and performing the movie at a dive bar in the boonies. He’s usually the only one in the theater, muttering the dialogue, learning the words and the moves, hoping to make his mark on a television show that announces a Tony Manero look-alike competition. In “King of Comedy,” Martin Scorsese slowed his style to silent-era framing and pacing, making the potential of Rupert Pupkin, of his promise and capability of “Taxi Driver”-like violence hang over every move of the characters. Larraín is more fervent in his observation of his deranged fantasist. There’s palpable conviction throughout: why shouldn’t disco and serial killing mix?

Raúl’s bursts of temper are sudden yet epic. The result is breathtaking black comedy. A scene where he turns on an older woman who’s taken him in is so cold, so abrupt, so unsentimental, it excites as well as appalls. The movie’s run ends. There’s a new show: “Grease”! This is not the one that he wants. The secret police take notice of the impromptu dance troupe. The claustrophobia closes in further. The small man’s rage grows. A man in a room. A man in a closed-off country. The man, the country. Why are you messing with my identity, my hard-won idealization of self, he seems to ask as he reacts to small slights and perceived indignities and the world at large. “Tony Manero” is bleak, thrilling work.