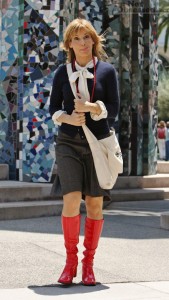 In another vocational comedy with a wordy hook, Sandra Bullock (she played a Manhattan book editor in this summer’s “The Proposal”) plays Mary Horowitz, a freelance “crossword puzzle constructor” for The Sacramento Herald. Screenwriter Kim Barker and director Phil Traill aren’t credits to their own calling, as they satirize their counterparts in the news entertainment sector. Mary pursues the title character, employed by CCN, a CNN-like cable news network. Once again Bullock’s socially disabled, romantically disadvantaged character is marginalized for taking her work too seriously. About five minutes into a blind date with Steve (Bradley Cooper from “The Hangover”) she’s mounted him in his car: “Now I’m going to eat you like a mountain lion.” To get her off, this news cameraman says he just got called away to cover breaking news. Gee, it would be great if she could join him on assignments. She thinks he means it. She publishes a puzzle that’s all about Steve that gets her fired. Off she goes in full-throttle man-chaser mode. To the tune of Peggy March’s 1963 hit “I Will Follow Him,” Mary undertakes an interstate trip to follow Steve at work wherever news breaks. Her big red ugly boots are made for stalking. Her hyper-verbal tic is tiresome as solo screwball patter. The normalcy message is inane. With Thomas Haden Church, Ken Jeong, Howard Hesseman, Beth Grant, Katy Mixon, DJ Qualls and Charlene Yi for seven seconds. 99m. (Bill Stamets)