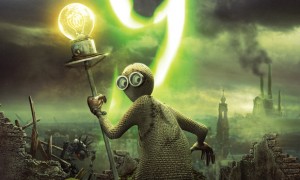 A strange parallel-universe parable about the folly of “blind allegiance to technology,” Shane Acker’s “9,” expanded from his Oscar-nominated 2005 short, takes place in a post-apocalypse world that resembles World War II Germany (with a handful of signs in German). Nine hand-stitched hand-puppets come to fearful life to battle machines left behind by a creator of terrible things: your average uber-scientist’s wake. Infernal, morbid, Acker’s work has affinities to that of co-producers Tim Burton and Timur Bekmambetov, partly in his willingness to allow images to remain incomplete, landscapes to be suggestive, rather than to fill in every possible distant curlicue. It’s enough the horizon be blasted, like Dresden or Rotterdam or Bushwick at dusk. This is a post-human world with modest sentiment to bring us to a small moral. The imagery remains at small remove, but there is a moment of a pair of the puppets, twins, projecting images through batting lens-eyes into each others’ brains that suggest utmost violence and affinity. Voice work by an affectless Elijah Wood, John C. Reilly, Jennifer Connelly, Christopher Plummer and Martin Landau. 75m. (Ray Pride)