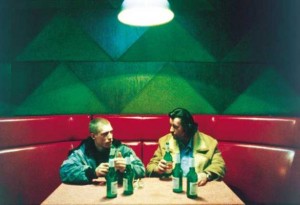 Sex trafficking is the subject of Austrian misanthrope Ulrich Seidl’s “Import/Export,” with brackish result: while his work, guest at over eighty film festivals worldwide, is pretty amazing on a formal level, filled with shimmering yet weighty brilliance, shot by Ed Lachman (“I’m Not There,” “Ken Park,” “Erin Brockovich”) and Wolfgang Thaler (Seidl’s “Dog Days” and “Jesus You Know”), his cold, relentless gaze makes Michael Haneke look like the well-behaved dinner guest that he is. Two stories dovetail, headed West to East and East to West, largely concerned with money and sex, readily a tale of contemporary Europe. Seidl’s meticulously precise compositions suggest less a world of beauty or of control than of chaos dispassionately observed. Like his fan Werner Herzog, Seidl sees the world in his own image: in his case, a collector of voyeurs, a collator of stares. He sees terrible things: Seidl is a twenty-first-century Diane Arbus without the fashion-magazine assignments. The sound design haunts: this is a Babel of the modern world. 135m. 35mm. (Ray Pride)