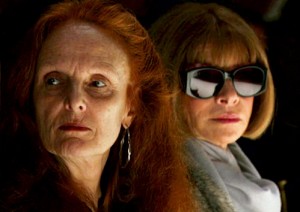 Some have contested R. J. Cutler’s “The September Issue” for not being what they’d hope to see, a combative portrait of longtime Vogue magazine majordomo Anna Wintour, chipping at her icy gaze from behind her helmet of bob and windscreen-wraparound sunglasses. Wintour takes down the tinted glass, but seems a timid host throughout: she has an agenda for allowing cameras into her domain in the weeks leading up to the mammoth September 2007 doorstopper of an issue, even if she is unaware of the faltering of the magazine market to come. There is a terribly uncomfortable moment with camera and crew (unseen) with Wintour in an elevator late in the documentary in an elevator. Tight smile. Anxious eyes. Wintour wants away. The impression is indelible: if her gaze cannot imperiously dismiss, she doesn’t know where to look. Cutler’s access does not give an inner life to Wintour, but discovers another’s: fashion stylist Grace Coddington, a red-haired free spirit, a former model whose career ended after an accident, whose eye for tableaux and moment seems after watching the film to be more of the fabric of the magazine’s je ne sais quoi than Wintour’s snips. Slightly older, Coddington arrived at the moneyed Conde Nast suites at almost the same time as Wintour. She’s the secret star and beating heart of “The September Issue,” and the images we see of her in her youth take the breath away: a beauty of startling dazzle who grew into a mothering, dizzy yet focused producer of bright, transient beauty. The cinematography is lively and Cutler dashes in details of the scene’s eccentrics with a wry eye. 88m. (Ray Pride)