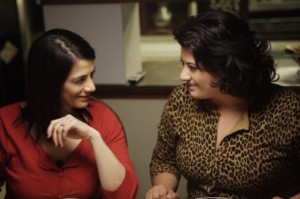 Shooting in Winnipeg, Cherien Dabis sets her Palestinian immigrant saga in an Illinois town about an hour and a half from Chicago. Her first feature as a writer-director follows Muna (Nisreen Faour) and her teenage son Fadi (Melkar Muallem) finding a new life with her sister Raghda (Hiam Abbass from “The Visitor,” “Lemon Tree”) who left the West Bank fifteen years earlier. At the airport, Muna is on shaky footing with her English. “Occupation?” She answers, “Yes it is occupied, for forty years.” At Fadi’s new school, she’s asked: “Is that a Jewish-speaking country?” Dabis draws on her upbringing in Ohio. Her physician father is Palestinian and her mother is from Jordan. The Columbia University-trained filmmaker says Muna is inspired by an aunt who came to the U.S. Another source is the prejudice Dabis encountered during the first Gulf War. Set in 2003, “Amreeka” (an Arabic coinage for “America”) includes news clips of the fall of Baghdad. A roadside sign urges motorists: “Support Our oops.” Raghda’s physician husband Nabeel (Yussef Abu Warda) loses his American patients, but Muna finds work at a White Castle. A blue-haired, lip-pierced high-school dropout offers her some solidarity, as does her son’s single Jewish-Polish principal. As a National Geographic Entertainment release, “Amreeka” makes more sense than the brand’s recent “U2 3D” concert film. For all her culturally alert and comic ethnography, Dabis fails to make much of a narrative. Pat domestic stuff has teens calling grownups “delusional” and asking why dad is sleeping on the couch. Fadi fights a racist bully. There’s a trip to jail and another to the emergency room. All is made almost right with an outing to a Middle Eastern restaurant in Chicago. With Alia Shawkat, Joseph Ziegler, Jenna Kawar, Selena Haddad, Andrew Sannie and Daniel Boiteau. 96m. (Bill Stamets)