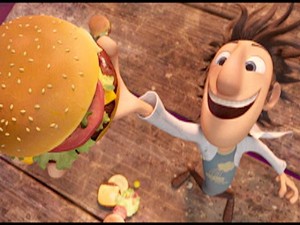 A 1978 kids’ book by Judi Barrett and Ron Barrett is the source of this animated 3-D PG fare about inventor Flint Lockwood (voiced by Bill Hader) whose gizmo– launched skyward by an extra jolt of 17,000 gigajoules– transforms upper atmospheric moisture into all manner of foodstuffs that rain down upon Swallow Falls. This single-industry island town was in dire need of a turnaround after the sardine market tanked. Mayor Shelbourne (Bruce Campbell) sees an opening for tourism and weather channel intern Sam Sparks (Anna Faris) sees her career break. Chris Miller and Phil Lord co-write and co-direct this loopy adventure with sarcasm and satire. Zingers fly from the fringes, often voiced by offscreen extras. The opening credit reads “a film by a lot of people” but an unoriginal agenda of uplift for the misfit kicks in with the opening voiceover by Flint as a schoolboy: “Have you ever felt you were a little bit different?” Mom bestows an oversized white lab coat on the little tinkerer. His fishbait shopkeeper pop (James Caan) utters unintelligible fishing metaphors that will only make sense after one of his son’s inventions–a Monkey Thought Translator–decodes the loving father’s intent. One nice surprise is the last-minute reveal of the extraordinary unsuspected skill set of Sam’s cameraman Manny (voiced with very few words by Benjamin Bratt). This Guatemalan immigrant can do more than turn the pages of the latest issue of Broadcast Engineer. As the heavens disgorge an apocalyptic deluge of “sentient” killer food, the action goes sugar-high ballistic. Science fixes the mess science inflicted. The National Science Teachers Association will eat this up. With Mr. T, Andy Samberg, Bobb’e J. Thompson, Neil Patrick Harris and Al Roker. 90m. 2.40 Anamorphic widescreen. 3-D. (Bill Stamets)