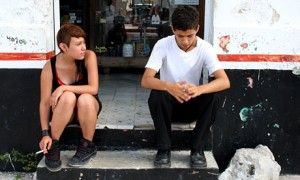 Near enough to the end of the twentieth century, screenwriter Paul Schrader pared down his directorial style in a movie about musical siblings called “Light of Day.”  Why simplify? It was the only way to compete with MTV, he said. The only way to contrast with an emerging style of editing that was based on speed and fury. That was also a couple years after Jim Jarmusch’s second feature, “Stranger Than Paradise,” which paralleled the deadpan of the Finnish Aki Kaurismäki, starting out around the same time. Directors like Bresson and Dreyer sought simplicity to suggest spiritual character; latter-day practitioners suggest loss, distraction, wandering without purpose, but to comic effect. Think Hal Hartley. Which it seems that young Mexican director young Mexican director Fernando Eimbcke did in his second feature, “Lake Tahoe.” Striking a blow for cute minimalism with cool, widescreen compositions that are reminiscent of Hartley’s “Simple Men.” Eimbcke’s inexpressive non-actors shuffle through the sweltering quest with genial results. Eimbcke has described his blackout-heavy, low-key style as “artisan cinema.” There is a handcrafted drowse to the almost-events: In a small town in the Yucatán in Mexico, a teenage boy needs a car part. It’s “Condensers” instead of “Transformers.” Lonely people need company. A part works. No, it doesn’t. No, we’re closed. Boy meets girl. Girl has baby. Dog glares. Old man chatters. A day passes. Laughs approach from somewhere far in the distance. 81m. (Ray Pride)

“Lake Tahoe” opens Friday for a week at Facets.