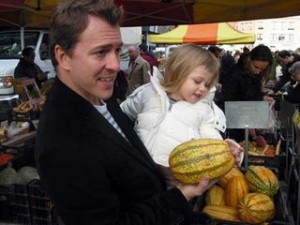 Call it “Superdownsize This.” Functioning as a satire of contemporary media, aspiration and errant idealism, the central figure of Laura Gabbert and Justin Schein’s “No Impact Man,” writer and environmental activist Colin Beavan, is merely annoying, Morgan Spurlock with a mission but with condescending patter and a pronounced lack of charm. (A colleague told me she felt a simmering desire to punch him out.)  But as he persists in his project as a 365-day idealist of eliminating any impact on the environment by himself, a privileged and connected Greenwich Villager with a book contract, his wife, Laura Conlin, a writer at Business Week, and their small daughter, friction sets in with entertaining results, even as he rubbished me the wrong way. (No imported food, no travel, no taxis, no air conditioning, no laundry detergent, no elevators, etc.)  The book’s extended subtitle seems like a preemptive strike against accusations of bourgeois liberal guilt: “The Adventures of a Guilty Liberal Who Attempts to Save the Planet and the Discoveries He Makes About Himself and Our Way of Life in the Process.”  The film also cleverly opens with clips of sardonic media coverage of his enterprise. Beavan’s blog (noimpactman.typepad.com) provides some of the savor of his character as presented on screen, and likely the flavor of his book. In prose, after dismissing a critic of his enterprise as “strident,” he sounds more reasonable. “Whether my book and the companion documentary of the same title are remembered as the stories of a stunt or not is ultimately immaterial. Of course, as a writer and a person, it hurts to be trivialized, but the truth is that ‘No Impact Man’ is both a stunt and not a stunt. Because my hope in living and writing about my year was to put myself in a crucible in which to examine some important cultural issues surrounding our solutions to our environmental crises as well as the quality of life crisis which is so closely related to them.” Beavan is a snit. Conlin is the voice of reason. “Mommy doesn’t really like nature.” Really? Beavan also appreciates comments on his project, such as the profane comments section of a Gawker.com entry. Comedy sparks. 90m. (Ray Pride)