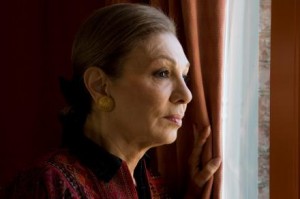 The most compelling face-off I’ve seen between two women on film in recent months would have to be “The Queen and I,” in which the filmmaker, Nahid Persson Sarvestani (“Prostitution Behind the Veil”), an Iranian communist expatriate, overcomes her anger and fear of Farah Pahlavi, the wife of the last Shah of Iran. What’s fascinating in the straightforward approach of the two women talking to each other is that their differences are, over the course of their conversations, outweighed by their similarities and their love for their lost homeland. Persson is cautious in her questioning, working within limitations, but the effect is similar to the extended David Frost-Richard Nixon interviews: personality skirts around the edges of the conversation, truths emerge quietly. Commonality rises above confrontation. (My favorite single moment is early on when Persson enters Pahlavi’s Parisian apartment for the first time, coming face-to-face with a bronze bust of the Shah: two scowls match.) An extravagant score is a modest minus.  89m. (Ray Pride)