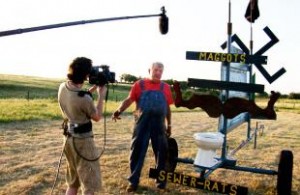 Chicago filmmakers Laura Cohen and Joe Winston’s “What’s The Trouble With Kansas?” takes off from Thomas Frank’s 2004 book of the same name and proceeds to collect portraits of Kansans with conservative beliefs, sometimes of extravagant measure. Proponents and opponents of abortion are at the center. Yet Cohen and Winston observe their succession of snapshots with empathy: the danger of caricature is skirted. Still, the uneasy intersection of politics and religion is forefront of the documentary’s concerns, where right and wrong become I’m Right and You’re Wrong. Interview footage with subsequently murdered Dr. George Tiller includes his statement, “if a stake has to be driven through the heart of the anti-abortion movement, I want to have my hand on the hammer.” Tiller’s location in Kansas led to some activists dubbing the state the “abortion capital.” “The Truth Truck,” paneled with bloody images of aborted fetuses, may still be circling. Is Kansas historically in the midst of these kinds of conflicts? The culture wars smolder.  90m. (Ray Pride)