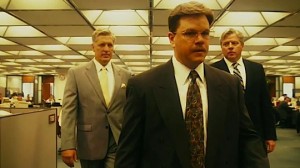 Stately, plump Mark Whitacre bounds through the frame within the frames of rooms in hotels and corporate offices in “The Informant!” like a man whose racing thoughts propel him ever forward, his near-pompadour of hair ever upward.

In Steven Soderbergh’s lovingly batshit comedy about corporate conspiracy and whistle-blowing at Midwestern agricultural combine Archer Daniels Midland (ADM) in the 1990s, the storytelling moves at a velocity past a couple of the “Oceans” movies, along with a voice-over of comic static from biochemist and corporate vice-president Whitacre’s (Matt Damon) head. Seemingly outraged by the liberties taken by his bosses, Whitacre becomes a mole for the FBI in what appears to be a price-fixing setup with Japanese competitors in the market for lysine, an amino acid derived from corn. Sounds deadly dull? Not for a second. “The Informant!” plays like an ADD edition of “The Insider,” everything that would possibly be glum imbued with a rosy, optimistic, hopeful charge. Whitacre’s brain crackles with non-sequiturs; his inability to focus at any given moment is what makes the movie both strange and eccentrically funny. While this reportedly under-$25 million comedy may be described by some as a straightforward movie by the experimentally minded Soderbergh, it may be his most cracked, fractured film since “Schizopolis.” It’s high-fructose mania. Overlapping, contradicting, questioning, reassuring, it makes you wonder for the man’s sanity almost immediately.

Long-quiet Marvin Hamlisch provides a jaunty score, elevated Muzak after a 1970s fashion, much like the main credits and title cards, which could make Quentin Tarantino stiff from 100 yards. Its anachronism and gosh-darned jauntiness might seem unsuited until we realize that like Jon Brion’s score for Paul Thomas Anderson’s “Punch-Drunk Love,” it’s part and parcel of being trapped inside the delusional adventure ride in Whitacre’s bursting dome. At moments, the way his internal monologue veers into matters sexual at moment’s he’s supposed to be focused, such as in a hotel meeting room while wired for sound, comes close to Gasper Noe’s “I Stand Alone,” in which its angry, violent, racist fury of a central character suffered what the director called his “infernal radio.” “Who’d make up someone named Regina?” he asks himself, leaving a meeting where his honesty has been questioned. “That’s the name of the capital of Saskatchewan!” (Which sounds like a line from “Schizopolis,” except the gibberish seems to hold meaning.)

Whitacre, superficially, is sunnier, even when bursting with self-righteous proclamations like a litany of how corn is in almost every foodstuff in the American larder that ends with the splutter, “Everyone in this country is a victim of corporate crime before they finish breakfast!” But the rapidly cut scenes with Damon’s pudge-boy figure darting through offices and corridors and parking lots embody mania.

Soderbergh, working as usual as his own cinematographer, shoots with his now-favored RED digital camera, and the intensely stylized look of “The Informant!” goes beyond “The Girlfriend Experience.” Technically, this look probably couldn’t even have been considered as recently as a year ago. Soderbergh pushes limits with the stylization. The design is stripped-down yet more iconic than merely functional: Whitacre paces back-and-forth in front of a bust of Lincoln; another executive’s office seems like a preschool, with a nameplate, three orange #2 pencils in a cup and charts on the wall on 8×10 sheets of pastel-colored paper. St. Louis is indicated by a distant glimpse of the Gateway Arch and the edge of an Anheuser-Busch sign. The shorthand extends to the tic of framing a female character so that she’s obscured in a scene by a product that symbolizes what their work has brought them: in the case of Sasha Grey’s escort, an expensive sofa; in the case of Whitacre’s wife, a pair of brown paper IGA grocery bags. Corporate campuses and and motel parking lots are deserted, visited only by feds, stoolies and scattering leaves. The only element that doesn’t suit the overall control is a sequence of newspaper headlines where the designer doesn’t even bother to match headlines to the style of the newspapers we see, like the Chicago Tribune and the New York Times. A tiny glitch in the midst of so much elegant, concentrated effort and accomplishment.

Even by daylight, scenes settle into the coral, umber and deep orange hues that sodium vapor light often affords in uncorrected digital photography. It’s not the 1970s visual cue to be paranoid, be very paranoid, the hard, chalky fluorescence of Gordon Willis’ memorable lighting for Alan Pakula’s “All The President’s Men.” Still, 1990s PC monitors glow green. Low-angled traveling shots capture hanging fluorescent lights, yet Soderbergh’s more interested in the geometry, a mad foreshortened mass above the characters’ heads like a violent crack in the sky.  The world outside is a burst of haze and white fuzz.  It’s like a visual hum. We’re in Whitacre’s melty, buzzy brain. Soderbergh and screenwriter Scott Burns’ nervy adaptation of Kurt Eichenwald’s 2000 nonfiction book comes courtesy of Michael London’s Groundswell Productions and Participant Media, producers always in search of socially conscious grownup stuff. What Soderbergh’s in search of is a parable about how we convince ourselves about the meaning of what we do for work. The twists in Whitacre’s telling-retelling are satisfying all the way to the final scene.