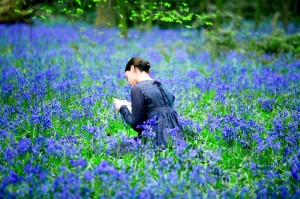 Phrases filter through “Bright Star” that should be  familiar even to those who don’t know the poetry of John Keats: “Beauty is truth, truth beauty, that is all/Ye know on earth, and all ye need to know.”

Writer-director Jane Campion has always been intensely engaged with disproportionate beauty, typified by the epic swoon of “The Piano” and its drenching Michael Nyman score, to the neon-hothouse of sexual Manhattan in her last film, “In the Cut” (2003). Campion returns with a quiet, tender movie that, despite its calm, is steeped in emotion.

The story of fragile, ill-fated poet John Keats (Ben Whishaw) and the clever seamstress Fannie Brawne (Abbie Cornish) who falls in love with his words, his thoughts, the man, “Bright Star” is period in dress and manner, but the propinquity of tenderness between the characters is almost immediately seductive. As the pair approach each other in their genteel courtship, passion flares. The film’s palette is calm, yet a first glimpse of Keats in a blue-velvet jacket sets the striking look. The costuming of the women, especially Fannie, has a latter-day clash of fabric, of color, texture and shine. Her cleverness as a seamstress extends to design, to all manner of decorative elements. It’s a subversive notion, to suggest how a strong woman, imaginative beyond her time, excels up in timeless frippery, gauzy, traceries of lace and tickles of ribbon, layered, lustrous. This is her truth, her beauty, to Keats’ measured language.

Whishaw’s Keats is the long-suffering consumptive romantic, and Cornish’s tactile intensity is compelling. Observing, she’s often caught catching her breath. The man who comes between the penniless poet is Keats’ protective mentor, the more established yet less talented Charles Brown (a wonderfully concerned Paul Schneider). It’s another rich performance in a film filled with them, down to gentlest gesture.

There’s a museum’s worth of paintings, known or quietly admired, that Campion and Australian cinematographer Greig Fraser consulted. From an early scene of Brawne sewing by lemony first light to the choice of medium-length lenses to separate the couple from the quietly feral background of untamed forest behind them, beside Hampstead Heath where they are neighbors, a timeless England is shown. And walking through it, Keats and Fannie Brawne perform the tickle and play of courtship as confession. They talk of poetry and love with the urgency of modern conversation of “American Idol” and financial crises and real estate and of cohabitation and Maclaren strollers. “There is holiness to the heart’s affection, only you know nothing of that. Believe me, it is not pride.” There’s a woman’s wrath!

Fannie first surprises Keats with her knowledge of his work. “A thing of beauty is a joy for ever:/ Its loveliness increases; it will never / Pass into nothingness.” She recites the poem back to him, to his surprise. “I wanted to adore it.” But? “I am not at all clever with poetry.” Fannie is clever in so many other ways.

And Campion is clever in her creation of mood. There are deeper blues in scenes toward dusk, of those cooled by rain. Surreptitiously, the images enfold and bind poet and muse. Level afternoon light in a sequence where the pair rush to Keats’ dying younger brother’s side suggests what it would have looked like if Vermeer went outdoors and admired rain-spatted streets instead of staying close to hearth and doorway. Campion suggests inner life through the gestures in the performances she gets from her actors in small moments, but also through her observant, imagistic style.

There is a passage in the movie’s cultivated swaddle of hush where the doomed pair drift dreamily in their own separate moment to Mark Bradshaw’s muted score (this music is not what Michael Nyman would write). John Keats’ jacket is off, but he still wears his vest and lies barefoot atop a flowering tree, as if in a floral tower or a bower turned cloud of bloom. In her intercut scene, muslin flows, curtain parts, light admonishes the white walls of her sleeping chamber, making them as liquid and formless for an instant like the light itself. The effect is perfumed yet incandescent. And the sound design asserts itself brightly with sounds of poeticized clarity. The ears drift back centuries to distant call of whippoorwill, cat’s purr, pen nib’s etch. As Keats grows ill and a life of shared love seems more unlikely, images increasingly suggest the delicacy of creation. The composition of Keats’ “Ode on a Grecian Urn” (“Half in love with easeful death”) is taken from a pocket in the form of small scraps of inked flaxen paper. In another scene, Keats has written Fannie.  Superimposed over a windowpane as he walks at distant seaside, his brown-inked cursive runs across white sky and pale ocean, language inscribed upon nature. Then Fannie’s feet fold and clutch from beneath the crisp white bedsheet as she sounds his language from the letter. (“Bedewed with pleasures” indeed.) The written world “dissolving” is shown as he speaks aloud, “dissolving,” and the image cross-dissolves. Not for the last time, the heart melts.