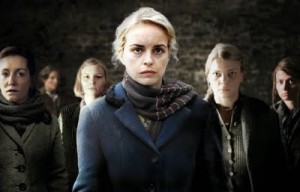 (Anonyma: Eine Frau in Berlin) “How do we go on living?” One version or another of that question keeps surfacing in movies from around the world; some, like “Flame & Citron” and Max Färberböck’s “A Woman in Berlin” are set during or after World War II, yet the period trappings leave the inquiry resounding into the foreseeable future. (“Inglourious Basterds” asks: how do we go on living as if we were in a parallel universe?) As in his earlier “Aimee & Jaguar,” Färberböck’s narrative fluency elevates varieties of passion not accepted by society as well as the dusty confusion of urban warfare. A female journalist published a diary, under the name “Anonyma,” capturing the April 1945 Red Army occupation of her neighborhood. She’s played by the incandescent Nina Hoss (“Yella,” “Jerichow”), and Färberböck’s restraint in depicting her negotiations for sexual survival is admirable. The telling tips toward melodrama, but in a way that feels both earned and often gripping. With Yevgeni Sidikhin, Irm Hermann, Rüdiger Vogler, Ulrike Krumbiegel, Rolf Kanies, Jördis Triebel, Roman Gribkov and Juliane Köhler. 131m.  (Ray Pride)