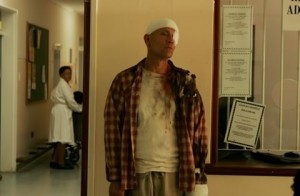 Gorgeously overwrought at times, achingly angry throughout, Australian director Steve Jacobs’ adaptation of J. M. Coetzee’s 1999 novel, “Disgrace,” is an ideal vehicle for John Malkovich’s customary mien of slightly creepy disdain, hostility and cosmopolitan snobbery. (And that’s a good thing.)  As adapted by Jacobs’ wife, Anna Maria Monticelli, “Disgrace” is impenitent in its portrait of racial relations in post-apartheid South Africa. Icy, affected Malkovich plays David Lurie, a college professor in his fifties who still approaches younger women of color; a seduction attempt with a mixed-race student takes him out of the university setting and into the rough landscape of his lesbian daughter (Jessica Haines) and her black farm boss (Eriq Ebouaney). Austere, exacting, painful: there will be no sudden grace in “Disgrace.” The succession of terrible events to come gains weight and power far beyond allegory for the country’s past, the grudges held, far beyond punishment for the hubris and privilege of Lurie. Bracing stuff.  120m. (Ray Pride)