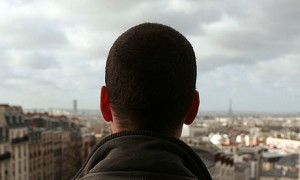 When French writer-director Cédric Klapisch first appeared on American screens in 1996 with the classically constructed “Family Resemblances” and the loping “When the Cat’s Away,” I’d hardly have predicted the filmmaker he’d become with films like 2002’s ” L’auberge espagnole” and 2005’s “Russian Dolls”: more and more in love with the surfaces of youth, the sway of romance rather than the swoon of romanticism. In his latest, the oo-la-la, oh-no-no titled comedic drama “Paris,” the 48-year-old director is generous to a fault to the City Of Light and the anguish of love deflected. Klapisch seems at least one remove from working his own variation on “Manhattan.” (The musical touchstone here is Satie, not Gershwin.) His customary leading man Romain Duris plays a dancer who watches his neighbors as he awaits a transplant to save his life. He watches life unfold all around him. Feelings must have been felt: the characters talk about theirs at latheringly soapy length. Articulate and witty, they’re forgivable. Unlike another glossy French director who claims to be a romantic, Claude Lelouch, Klapisch’s characters at least seem to be in the same scene, the same movie. There’s a genunine sense of connection in his large cast, which includes Juliette Binoche, Melanie Laurent (“Inglourious Basterds”) Fabrice Luchini, Albert Dupontel, Francois Cluzet, Karin Viard, Gilles Lellouche, Zinedine Soualem, Julie Ferrier, Olivia Bonamy and Maurice Benichou. Oh, and Paris itself. What a beauty! 128m.  (Ray Pride)