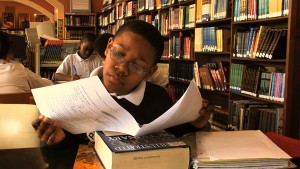 Rollin Binzer directs this promotional piece for a parochial high school in West Garfield and its elementary-school spinoff in Englewood. “The Providence Effect” begins with seniors graduating from Providence-St. Mel in 2007, and ends with kindergarteners graduating from Providence Englewood Charter School that same year. These students do not emerge as characters in this polished documentary that’s mostly shot on school grounds. Binzer never follows kids home. Their neighborhoods are portrayed via drive-by panoramas of old men sitting in vacant lots and young men on sidewalks, all framed as proof of the failure of U.S. schools. By contrast, Providence St. Mel claims a “thirty-year 100-percent college placement” record. A roster of successful alumni supply ringing endorsements. Many can fondly recite the school’s morning mantra that starts: “At Providence-St. Mel, we believe. We believe in the creation of inspired lives produced by the miracle of hard work.” It continues: “We believe that one must earn the right to dream,” and concludes with “[W]e believe that we can take this place, this time, and this people and make a better place, a better time and a better people. With God’s help, we will either find a way or make one!” Founder and principal Paul Adams III is the main focus. Perhaps the most upsetting revelation is that the country’s best teachers would rather not teach at all if they could not teach at an exemplary school like Providence. The documentary boasts how many dollars in college scholarships its students earned but does not report the tuition fee their parents and relatives pooled. “All profits from this film are reinvested in education and Providence Schools,” reads an end title that signals the film’s agenda as a fundraiser. Give extra-credit points to director of cinematography Robert Tutman, a former CBS national television news shooter, and co-composers Tom Dumont and Ted Matson for a look and a score that surpass the reporting of this uplifting infomercial. 92m. (Bill Stamets).