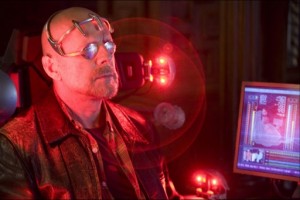 People are not who they appear to be in corporate conspiracy thrillers. The incidence of deceiving appearances increases exponentially in “Surrogates” because most people are in fact at home plugged into recliner “stim chairs” that let them wirelessly operate their life-like personal robots in the workplace and non-work places alike, day and night, with recharger stations in public places. Whatever your sexy, dexterous surrogate experiences, so do you. The ultimate upgrade of avatars is in virtual worlds. Less-perfect-looking Luddites—grizzled, wrinkled, older, overweight, flannel-wearing, shotgun-toting organic farmers, scrap-metal recyclers and cultists—isolate themselves in retro-reservations posting “Humans Only” signs like those recently seen in “District 9.” Writers John Brancato and Michael Ferris adapt the graphic novel by Robert Venditti and Brett Weldele, moving the action from Georgia in 2054 to Boston in the “Present Day.” Bruce Willis plays an FBI agent Greer, both as a surrogate and his true self. He and agent Peters (Radha Mitchell, likewise playing a shiny and a less shiny version of her character) investigate a murder that leads to a weapon that could topple a financial empire and unplug consumers from a product advertised as “Life… Only Better.” This thing could kill off all the live “meat” occupying those stim chairs. Rather like a surrogate itself, “Surrogates” presents an alluring surface in its satiric set-up. Underneath it’s just another scheme by a super-rich, uber-technoid. Much of this is older than Fritz Lang’s Dr. Mabuse. One more panopticon. Once more, fear of mass loss of free will. Evil capital versus the Enlightenment. See variants in “Final Cut,” “Eagle Eye, “Minority Report” and “Gamer.” Director Jonathan Mostow (“Terminator 3: Rise of the Machines“) operates his cast as surrogates. When the opening voiceover orders: “Look at yourselves,” you’re not really supposed to mistake your seat at the multiplex for a stim chair. With Rosamund Pike, Boris Kodjoe, James Francis Ginty, James Cromwell and Ving Rhames. 85m. (Bill Stamets)