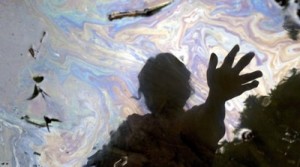 Turn the tap, water comes, flip a switch for light: pull up to the pump before driving to the discount grocery for the week’s dinners.

We take delivery systems for granted, the social and economic structures that allow for, if not peace of mind, for “out of mind.” The genius of Joe Berlinger’s muckraking, muck-steeped “Crude” is that his clear, patient eye, taking a specific ecological tragedy to suggest the failure of systems, through the filthy work of extracting oil from beneath the earth’s surface, the almost-inevitable despoiling of water and other resources, and courtroom systems that pit international conglomerates, lawyers and locals against each other. Crude? “Texas Tea”? It doesn’t just bubble up like in “The Beverly Hillbillies.”

Over three years in the making, “Crude” examines a twenty-seven-billion-dollar class-action suit against alleged pollution filed by indigenous Ecuadorian residents—the Cofón Indians, 30,000 strong—in the Amazon against Chevron Oil, successor to Texaco (after 2001). They charge that eighteen billion gallons of wastewater polluted the land and rivers of an oil patch roughly the size of Rhode Island from 1970 to 1990. Rashes, birth defects, leukemia and other cancers followed. A “death zone” of pollution lingers. Bureaucrats interfere. Officials delay. The law is a labyrinth. The case has lingered fitfully over sixteen years and no end is in sight. (A recent complication: a judge involved in the case is now being investigated for corruption.) Berlinger gauges a vast river of litigation and allegation: Amazonian, yes. But Berlinger’s tack differs from the comic outrage of a Michael Moore, say: this is classical reportage, not “Petroleum: A Love Story.” While “Crude” appears to be on the side of nature against corporate intrigues, Chevron is given its chance to present its side. But the opposing images of damage to the land versus the corporation in its gleaming towers, make it seem less Goliath than David, as it works to shift responsibility for the chaos to any other entity, including the national petroleum company and earlier legal compacts. Berlinger cleanly  deciphers the strategies and tactics of the opposing sides.

Still, that gallon of gas at the self-serve pump leaves a mess in its wake. The world is not simple. Berlinger, as in the post-vérité pictures he co-directed with Bruce Sinofsky, like “Brother’s Keeper” and the “Paradise Lost” documentaries, has the perspective and tenacity of an investigative journalist but the image-making cinematic skills of a gifted filmmaker. (Even their Metallica documentary, “Some Kind Of Monster,” collected evidence through observation. We watch, the films say, and perhaps you will see.) As documentaries mutate and proliferate, anecdote and personal experience is nowadays sometimes elevated over the act of eyewitness. Yet “Crude” functions as well as a lucid procedural, malfeasance and outrage alternating with the clarity of fiction, deciphering layer after layer of what otherwise offer only confusion and frustration. The elemental contrast is damning: corporate claims are matched against images of ruined jungle and water gleaming with rainbow slicks of spillage. The horrible thought appears and persists: the making of one world grows from the unmaking of another. Inconvenient truth, yes.

The film lingers on two figures: local lawyer Pablo Fajardo and rat-a-tat-tat New York attorney Steven Donzinger (as well as Ecuadorian environmentalist Luis Yanza). Later in the film, a Vanity Fair writer swoops in to profile Fajardo, followed by producer-activist Trudie Styler, a founder of the Rainforest Foundation. Next? Her husband, Sting, with a benefit concert. The light shone by celebrities alerts the world to what’s at stake, but what comes afterwards?

Berlinger’s intelligence as a filmmaker is bracing: solid work about terrible, tragic doings. This is not a colonialist’s gaze. “Crude” wonders: where is justice? What is justice? How will it come? As with the outbreak of recent documentaries about the complex industrial processes that make the contemporary world possible yet also endangered despite grasping profit margins, activist work like “Food, Inc.,” any note of hopefulness is damped by the knowledge that once the lights go up, other indignities and inequalities will persist. Not all struggles are futile. Berlinger works with a steely eye but an optimistic heart. Yet the elegiac images of poisoned water linger, as difficult to shake as the images of enduring human endangerment. Berlinger lets larger implications suggest themselves: In stories, catastrophe is a romance of ruin, but apocalypse exists outside of Roland Emmerich movies; it exists in the incremental cost of everything that makes what we take for granted possible. And on the seventh day? God retained counsel.