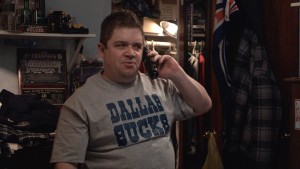 Robert Siegel, screenwriter of last year’s “The Wrestler,” makes his directorial debut with another story of epic loneliness and solace taken in sports. Paul Aufiero (Patton Oswalt) is an obsessive New York Giants fan; he works as a parking attendant and lives with his mother in the shadows of his successful family-man brother and equally satisfied sister. His late-night phone calls to a New York sports-talk radio station are his only release. One night he and a buddy stumble across one of the Giants’ star players, and in an epic misunderstanding Paul is beaten within an inch of his life. What follows threatens Paul’s dedication to his Giants. Siegel’s oddly-nuanced pseudo-comedy relies on Oswalt’s twisted performance—you both feel sorry for him and are annoyed with him, which causes a level of discomfort that’s not relieved by the unpredictability of the plot. He carries it in a way that many other actors could not, with some help from Kevin Corrigan as his adoring sidekick. Despite an ending that I, as a football fan myself, appreciated, I couldn’t help but feel an unsettling emotional confusion. (Tom Lynch)