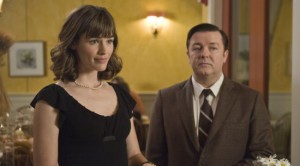 Brit comic Ricky Gervais (BBC’s “The Office,” HBO’s “Extras,” “Ghost Town”) stars in this divine satire he co-writes and co-directs with Matthew Robinson. Laced with sweet misanthropy, “The Invention of Lying“ opens with a voiceover by Mark Bellison (Gervais) pooh-poohing the credits. He explains the world of this film is one without lies, but he will invent them soon after he is fired. Mark writes scripts for Lecture Films Motion Picture Studios, under the banner of  “We Film Someone Telling You About Things That Happened.” He is stuck in a rut telling the truth about the fourteenth century. This does not impress Anna McDoogles (Jennifer Garner, “Ghosts of Girlfriends Past”) who tells him in the first minutes of their first date that he’s unattractive and an unfit prospect for procreating. Their love story dawdles, while the premise zings. After a deep cortical anomaly equips Mark to make up stuff, he cannot explain to his buddies, including Philip Seymour Hoffman as a barkeep, that he is lying since there is no word for “truth” nor one for its antonym. No one is deciding to tell the truth and no one doubts anyone is not. They simply say what they’re thinking and simply believe what they’re hearing. It’s a weird, if simpleminded way of life. There’s no Ninth Commandment to break. But then Mark wants his dying mother Martha (Fionnula Flanagan) to believe there’s more than “nothingness for all eternity.” A doctor and some nurses overhear him at her deathbed and want to know more about it. What comes next recalls both “Pleasantville” and “Religulous.” With Rob Lowe, Jonah Hill, Jeffrey Tambor, Louis C.K. and Tina Fey. 100m. (Bill Stamets)