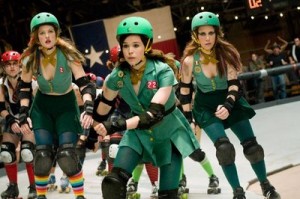 Ellen Page plays bored Texas teenager Bliss Cavedar in Drew Barrymore’s feature directorial debut, “Whip It,” a girl aching to escape the confines of small-town life, a deadend waitress job and an overeager pageant mom who would like nothing more than her daughter to follow in her high-heeled footsteps and a vapid Vaseline-coated smile. On a shopping trip to nearby Austin, Bliss is intrigued by a band of tattooed roller-derby girls dropping off flyers for an upcoming game. After sneaking one into her bag, Bliss and her best friend Pash (Alia Shawkat) head to the match under the guise of an away football game. At the game Bliss is introduced not only to take-no-prisoners sports for women, but an entire subculture of cute rocker boys, Lone Star-induced mayhem and ironic vintage t-shirts. Talking to one the players after the match, Bliss is invited to a tryout the following week. Despite the other players towering over her diminutive form, Bliss soars through the tryout on Barbie skates, her small stature giving her a speed advantage that secures her place on the team. A double life begins. Lying to her parents about attending an SAT prep class, she takes the bingo bus to Austin for practice with the Hurl Scouts as one of their jammers, now nicknamed “Babe Ruthless.” Wouldn’t you know? She quickly climbs the ranks to become the poster girl of the Austin Derby League. The action scenes are a thrill: the actresses reportedly did their own stunts in some pretty sweet costumes. Even intimidation from rival-team jammer Iron Maven (Juliette Lewis) seems to have a positive effect on Bliss, as she learns that honesty and support from the people she loves is more important than winning. Not every coming-of-age story for girls has to end with a tiara on the lead character’s head; a crash helmet does nicely, too. (Julie Gavlak)