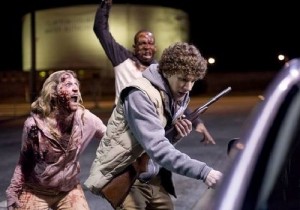 Total batshit zom-com that’s as outrageous as the TV spots indicate, Ruben Fleisher soaks his feature-length debut with endless amounts of guts and gore. It’s funny, too. In a world overrun by zombies, college kid Columbus (Jesse Eisenberg) has kept himself alive by following a strict set of self-imposed rules for survival—beware of bathrooms, keep good cardio, always shoot zombies twice (double-tap)—and one day reluctantly teams up with wild zombie-hunter Tallahassee (Woody Harrelson, having as much fun as he can). The pair picks up two female siblings along the way and head to California, and it’s off to the races, zombies meeting their doom in creative and unfortunate ways from start to finish. Fleisher’s film doesn’t feature the same sort of everyman wit as “Shaun of the Dead,” the comedy here broader and bloodier, but it’s goofy, gruesome fun nonetheless, and features an extended cameo smack in the middle that’s as amusing as anything I’ve seen on screen this year. I’d love to elaborate, but it’s better if you don’t know. Harrelson’s particularly entertaining as the roughneck, maintaining my theory that any movie improves once Woody Harrelson is cast. (Tom Lynch)