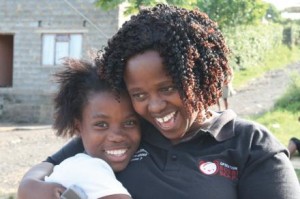 Veteran documentary-maker Kim Longinotto’s “Rough Aunties” follows a group of women who work as Child Safety Officers and counselors for raped and abused children in Durban, South Africa. The Organization is called “Bobbi Bear” and despite its cuteness, the name brings fear to anyone who has harmed a child in the community.

They work mostly with Zulu children, raised in a culture where sexuality is taboo, and even speaking of “private parts” is cause for shame. The women use stuffed bears to help to child feel safe and open up about abuse. Instead of asking the child to speak, they are simply handed a Teddy bear, Band-Aids and a magic marker. Band-Aids are placed over the bear’s mouth or eyes to show where they were covered during the assault, ink marked between the legs to show where they where violated.

These women have experienced horrors beyond anything most people can imagine. Toddlers being sodomized; a mentally handicapped girl was raped once by a neighbor, than again a few days later by her own grandfather. And this is just work. During the course of filming, one woman lost her only son to a drowning by her home. Rumors spread of a mining company illegally taking sand from the river, causing sinkholes, a reason for the increase in drowning deaths. Another had an extended family member die from a gunshot wound inflicted during a house robbery in a white suburban neighborhood. Her co-workers wasted no time aiding her in any way possible, including cleaning the pool of blood left behind after the crime. Despite all these events (and more we surely do not know) these women have not lost their capacity to feel joy in small victories.  The hope, knowledge and strength they spread among the women in their community reaches past the bounderies of race and class. These Rough Aunties greet every day the best they know how,  a swagger in their step,  a cigarette in hand. 103m. (Julie Gavlak)