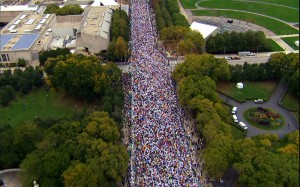 No other competition is quite like a marathon, because no other event in sports puts its elite athletes on the same playing field, on the same day and time, with such a vast and diverse collection of amateurs. Combine this with its intensity and the duration of the preparation, and you have the foundation for naturally rich narrative. “Spirit of the Marathon,” a documentary that chronicles six stories of runners preparing for the 2005 Chicago Marathon, plumbs these advantages, following first-timers, old-timers and the fastest runners in the world, including Deena Kastor fresh off her Bronze Medal at the 2004 Athens Olympics and Kenyan sensation Daniel Njenga. Director Jon Dunham—a veteran marathoner—manages to cover these simultaneous stories, unfolding across four continents, with a finesse that belies the project’s modest budget, interweaving a history of the marathon and interviews with the sport’s leading figures, letting the natural narrative of triumph and setback tell the story. (Given the number of women running, it’s particularly surprising to hear about Kathrine Switzer’s covert entry in the previously male-only 1967 Boston Marathon, where an enraged race director tried to physically remove her from the course.) Having secured the cooperation of the Chicago Marathon, the race day footage is remarkable, as Dunham keeps his cameras trained on his four “locals,” no mean feat when they’re mixed in with tens of thousands of runners spread out across 26.2 miles. (Coverage of the elites comes from local televsion.) Next Sunday (October 11), 45,000 runners will compete in the Chicago Marathon. The size of the field might seem to diminish the accomplishment of its participants, but as “The Spirit of the Marathon” reminds us, those are 45,000 stories. (Brian Hieggelke)

“Spirit of the Marathon” premiered at the 2007 Chicago International Film Festival, where it won the Audience Choice Award. It was released by Fathom Events in early 2008 and became Fathom’s top-grossing event to date. On Monday, October 5, it will screen at 6pm and 8pm at Film Row Cinema, Columbia College, 1104 S. Wabash, (312)344-6650, and will include a Q&A with director Dunham and some of the featured subjects in the film. Advance tickets at marathonmovie.com. The film is also available on DVD.