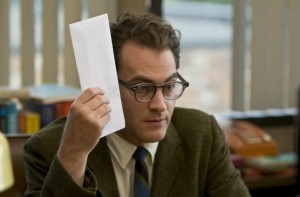 Joel and Ethan Coen’s curiously entitled “A Serious Man,” a serious film, documents the midlife catastrophe of Larry Gopnik (Michael Stuhlbarg), a physics professor in 1967 Minnesota who contends with an impending divorce, a professional crisis, a troubled brother in a downward spiral, religious confusion and adolescent kids who barely recognize he’s there. (Amusingly enough, this film could also have been called “The Man Who Wasn’t There.”) The Coens streamline their story as if it were a Jewish folk tale—setting the mood by opening the picture with a humorous yet chilling parable in the form of an apocryphal Yiddish folktale—as they inflict blow after blow to the sad, sorry Gopnik, a man so thrust into spiritual and emotional upheaval he attempts to seek the advice of three separate rabbis. (None are helpful.) Perhaps that’s the thesis of “A Serious Man”: help is most certainly not on the way. The Coens take some clever shots at the nature of Judaism and sprinkle their script with Yiddish slang, and, with a wink, sometimes even their characters don’t understand the terms tossed around. Working with one of their strongest scripts and a mostly unknown cast, the Coens craft a film that could possibly be an essay on their own upbringing (Jewish Minnesotans), but one can only guess with these filmmakers, who reportedly wrote the screenplays for this, “Burn After Reading” and “No Country for Old Men” all at the same time. Stuhlbarg shines as our sufferer, and Aaron Wolff, as the main character’s teenage son preparing for bar mitzvah, charms as well, up until the final, stunning shot. With Richard Kind, Fred Melamed, Sari Lennick. 105m. (Tom Lynch)