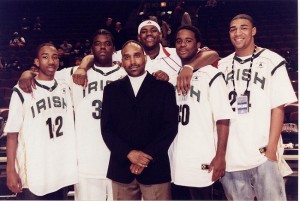 “These were six of the most compelling individuals I had ever met,” says first-time filmmaker Kristopher Belman of the five African-American basketball players and their coach that he documented for six years. “I wanted to tell a story about friendship.” Four kids in Akron, Ohio started playing together at age eleven. In high school a fifth joined them. Championships, setbacks and comebacks are tracked in home videos from the early years and later by sports channels. One player, LeBron James, draws special attention driving a $55,000 Hummer and making the cover of Sports Illustrated prior to going pro with the Cleveland Cavaliers. He’s also an executive producer here. For all his access, Belman never gets at the bonds between the players. Nor is there much attention to their playing style or their coach’s tactics. Also missing is the context of their off-court lives in school, church, or the streets. With Sian Cotton, Dru Joyce III, Willie McGee, Romeo Travis and Coach Dru Joyce II. 103m. (Bill Stamets)