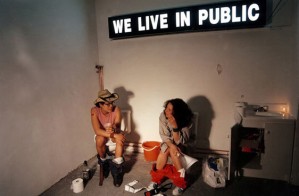 Ondi Timoner begins her film with a voiceover that would better work for a fake documentary: “This is the story of the great internet pioneer you’ve never heard of.” Meet Josh Harris. The first minutes of this documentary employ a fake-like style that lets you think you’ve never heard of Josh Harris because he’s only a made-up character in a satire. One who would name his site Pseudo.com. But Harris is real. He was a dot-com blowhard and burnout who yakked about life on the internet. He once installed thirty-two surveillance cameras and sixty microphones in his loft to record life with a girlfriend. He also outfitted a basement with cubicles for 100 people to live for thirty days on camera. Now dodging creditors in Ethiopia, this entrepreneur never says anything of note about the nineties or the internet, but the filmmaker gets part way into Harris’ rather pathetic personality. Key evidence: he sends a goodbye video to his alcoholic mother as she was dying of pancreatic cancer, and Harris claims he obtained his humanity from watching “Gilligan’s Island” on TV. Now that you’ve heard of Harris, you wonder if his peer pioneers conceived more than business plans. 90m. (Bill Stamets)