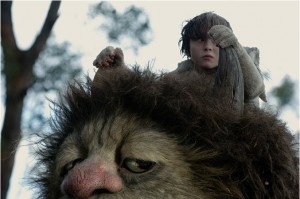 In a brief ninety minutes or so, if you discount the end credits, Spike Jonze and Dave Eggers’ adaptation of Maurice Sendak’s nine-sentence 1963 illustrated children’s book captures the sensation of a child’s head, buzzing as with bees, filled with parts yet to be connected and potential yet to be explored and acted upon and lived up to. It’s the opposite of the usual studio-film obstacle of attempting to compress a 500-page novel into the confines of a traditional feature film length.

The result is a “wild rumpus” throughout, to use a phrase from the story. The events are episodic, resulting in an elliptical character, a scattiness, that’s slightly disconcerting in the theater, yet the morning-after taste that’s left is rich with the sensation of febrile, pre-hormonal surges of imagination yet to find its flowering.

Max (the beautifully cast Max Records) is a 9-year-old who doesn’t fit in with his older siblings, the other kids on the block, an adoring single mom (Catherine Keener). The other kids smash his handcrafted igloo while from nearby streets we hear whimper-barking distant dogs. The movie is largely handheld, and shot in Jonze and cinematographer Lance Acord’s favorite glumboat colors, blue, gray and grayer.

Max loses his temper one night while mom’s talking to her boyfriend (Mark Ruffalo) instead of him and runs away, escaping to another world, inner and outer, clad in Chuck Taylors and a ubiquitous wolf suit. Records is cherubic yet tender and tough: a child as an improvement on even your most idealized memories of childhood. The music, by Karen O and Carter Burwell, is iPod-pop amid rumbles of thunder, bursts of minor-chord sad songs of strum, hum or murmur.

This is a melancholy beast. Only a few hours since seeing Spike Jonze’s long-gestating “Where The Wild Things Are,” I’m not sure what I think of it: it feels like a long-simmering movie, where the memory of its best moments will warm for weeks. Even the notoriously curmudgeonly Sendak reportedly approves of most, if not all of what’s on-screen. One point of contention among the men: The charmed forest doesn’t manifest from Max’s room. Jonze and Eggers felt Max needed a splendid, tempest-tossed journey to get to the island of his rumbling sensitive-little-boy dreams.

The monsters, huge and strange, are all quivering components of Max’s own emotions. The largest and angriest, Carol, is voiced by James Gandolfini, and is banded with a striped “shirt” of fur, accentuating him as the biggest pouty boy on the reservation. The other voice talent is  eccentric as well, yet it would not be the same movie with Forest Whitaker channeling Tom Noonan or a snapping Catherine O’Hara, as well as Lauren Ambrose, Chris Cooper and Paul Dano. The creatures name Max “king” after brief consultation (although they do mention they usually eat their kings) and after a few destructive acting-outs, they harness anarchic energy into fortress-making.

The film was shot down under in remote reaches of Australia, with landscapes providing extravagant backdrop to the childishness in the foreground. It’s animal planet and boy is animal. The wild things’ workdays building their fort seems a thousand hours long and the nights only brief instants. The handiwork of the fort is splendid, whorls of sticks resembling swooping Santiago Calatrava formations or Frank Gehry phantasmagorias fashioned from rushes and straw. (Carol has also tried to create a private world inside a world, a city of maquettes constructed in a mountainside.)

There’s an award for independent films without distribution that I’ve served as part of the jury of for several years. Watching twenty or thirty small movies this year, the greatest surprise is not just quality but the level of formal innovation, of using the freedom of lower budgets and expectations to explore cinema as visual and aural language. My resounding feeling after seeing “WTWTA” is that Jonze’s work fits with these movies that may never play at a theater near you, but sadly, may be one of the last deca-million-dollar-budgeted American movies with such a sense of play and such willingness to establish a language that expresses mood and moment outside the armature of the 120-page screenplay with familiar plot construction.

“Wild Things” has a closing shot with all the emotional gravity the rest of the film skates over via indirection and implication and metaphor.  Jonze leaves us with an image that is a feat of editing choice and of stilled, watchful performance, a reaction shot of all reaction shots. All the emotional gravity of the rest of the film, achieved through indirection and metaphor, comes to rest in the essential image to for an audience to leave with. It’s made of simplest awe. And yes, as Sendak’s book lets us know, “it’s still hot.”

“Where the Wild Things Are” opens Friday in 35mm and IMAX.