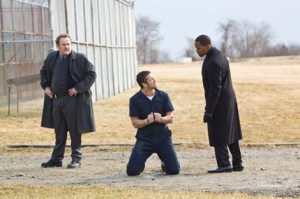 As they no doubt teach in thriller screenwriter workshops, don’t put a soldering iron in the hand of a loving father in the first minute if you’re not going to bring it back to engineer chaos later. Screenwriter Kurt Wimmer and director F. Gary Gray (“The Italian Job”) put together a passable genre product set in Philadelphia. It’s Assistant District Attorney Nick Rice (Jamie Foxx) versus Clyde Shelton (Gerard Butler) The former boasts of his 96-percent conviction rate; the latter aims to “bring down the whole fucking diseased corrupt temple down on your head.” Back to the soldering iron. Clyde is tinkering at home. Enter two home invaders. Clyde survives. His wife and daughter do not. One bad guy gets a deal. The other gets the death penalty. Ten years later both die by vicious extra-judicial measures. Clyde masterminds extravagant “biblical” revenge on the courts and the malpractice of justice. (The press notes pitch “Law Abiding Citizen” as “an incriminating look at the inconsistencies of an overloaded justice system.”) Wimmer peppers his script with hard-nosed dialogue about doing the right thing by breaking the law. “Fuck his civil rights,” snarls Nick, as he trespasses on property traced by illegally accessing Panama bank transactions. Clyde’s CV includes “pulling some really nasty shit so we can live the American dream.” Nick is advised to work around Clyde’s due process and “put a bullet into his head.” Gray’s directing, though, is by the book, except for a headscratcher or two. One nonsensical sequence contains parallel editing between a lethal injection and a school recital at opposite ends of Philadelphia. This cut matches two shots of curtains opening at the same time: one for a cellist on stage, the other for a convict strapped to a gurney. With Bruce McGill, Colm Meaney, Leslie Bibb, Michael Irby, Regina Hall and Viola Davis. 108m. (Bill Stamets)