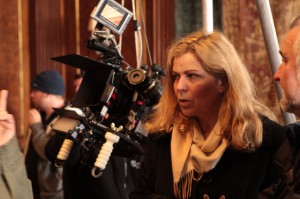 Lone Scherfig’s “An Education” traces a few months in the life of a teenage girl, Jenny (Carey Mulligan, quicksilver) in the early 1960s in not-yet-swinging postwar London.

She meets an older man (Peter Sarsgaard) whose carefree, flirtatious lifestyle seems to represent everything her uneducated parents (especially father Alfred Molina) are not. The dalliance with David is one of many educations the character will face (and certainly Lynn Barber did, the notoriously sharp journalist whose memoir published in Granta was adapted by Nick Hornby). It’s implicit in the bravura nakedness of Mulligan’s expressions. From the film’s opening, rat-wet and pelted with rain, before David offers her and her cello a ride in his flash car, her features are alive. “That’s really basic for a good actress, that you can read their faces quickly. Or a good actor,” the Danish director tells me. “That these emotions sort of rinse, or wash across their faces. All of these things you don’t want to say about actors because they are so cliché-ridden and sounds like someone who doesn’t know what they’re talking about, but the more I work, the more I realize, unfortunately, it is true. There is such a thing as screen quality and emotions washing across faces. All these things you hated. I mean, I think it’s primarily about craft and about interpretation and about courage and trust but it’s also about talent, and she really has that. She hasn’t done that much yet but she’s already quite experienced for her age. When she gets the experience, it’s going to be fantastic to see what will happen to her.” She went directly to “Public Enemies” afterward and is shooting “Wall Street 2” now. “It’s good that she’s not immediately labeled. Maybe it’s because this film doesn’t label her. It’s not a romantic comedy. It’s not a comedy! But you do laugh and [Mulligan] can show so many facets of her talent in this film and she’s… in… every… scene.”

The Audrey Hepburn comparison… “It’s just a hairstyle!” In a key scene where she’s dressed most like Hepburn, she’s also a dimply girl like Shirley Temple, Shirley Temple aiming to become Audrey Hepburn. Scherfig laughs. “It’s just the hairstyle, really. It’s not intentional. We did look at a lot of pictures of film styles from the period but costumes were mostly inspired by private photo albums. We wanted authenticity.”

Scherfig has worked with her fellow Dane Lars Von Trier on several projects, including the fifth Dogma film, “Italian for Beginners.” But her work seems concerned about the temperature of a moment, fleeting looks and glances that accrue. “Yeah. That’s what this film is about. It’s so much about detail. I remember, Lars Von Trier and I worked together many years ago, it was a series of advertising films. And he and I had a conversation where I said to him, this I don’t remember, he told me later on. He told me I had said to him, well, I have to get the details right. And he’s like, ‘Oh my God, she’s got that wrong. It’s not about details; it’s about the whole. It’s about, who cares about the details? You want to get the overall concept right.’ Then, after ‘Italian for Beginners,’ he came to me and he said, I thought you were such a fool then, but now I understand what you mean.’ But he’s right, his films are concept-driven. But he’s a perfectionist. Dogma was all about not looking at details. And then again, ‘Italian for Beginners’ is made entirely from reactions and gestures and a stupid little green drink and a pair of shoes and someone putting their hand on somebody’s else’s hand, much more filigree that then turns out to be the work.”

As for “An Education,” “With this kind of film, if I had attacked it with a strong, strong concept it may not have suited the film. The film is about just using that quite light story and then add layers and layers and layers and details and details so it’s a contained space that you enter and see the world through Jenny’s eyes and just go into that world for a couple of hours and then you’re out on the street with more knowledge and view of the world and of the character that was shared with you for a couple of hours. But with a film like ‘Antichrist,’ it’s much more like coming into an art museum and seeing a mind-blowing work and then going back on the street. It’s two completely different… I mean, we’re both filmmakers, but we just play on completely different instruments. But I admire the way he works immensely, I would love to be able to be so uncompromising.” And uncomfortable. “Yeah. That’s the price you pay is to not have as much harmony in your life as I have. His life is… Well, it’s not quite true, because he has a really good family life. Chaos may reign but he certainly has a very nice, beautiful home and a good wife and children.”