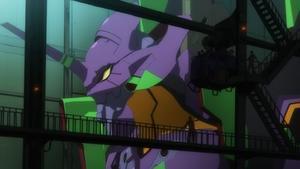 (Evangelion Shin-Geki Jo Ban) Co-director Hideaki Anno extends his influential, $1.4-billion grossing 1990s “Neon Genesis Evangelion” anime series with “Evangelion: 1.0 You Are (Not) Alone,” the first of a proposed four films from the same man-vs.-Mecha mythology. The setting is post-apocalypse Tokyo, after “The Second Impact,” which kills half the world’s population. “Tokyo-3,” as it’s called, is what remains of Japan, now under siege by a variety of mankind-killing creatures called Angels. Where’s that 14-year-old boy who might save the world? Shinji Ikari, you come here right now! There’s a universe of Japanese anime films I haven’t seen, but it’s always satisfying to see lovingly rendered, densely imagined, nearly incomprehensible universes up on screen, using computer-generated imagery to create a rich visual language suited to the individual project rather than to daub explosions and crumbling towers onto the horizon line behind rock’em-sock’em robots bantering in the desert. “Evangelion” portrays a dying world with mankind doomed but it’s an alluring eyeful. 98m. HD. (Ray Pride)