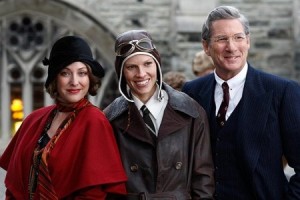 They should have called “Amelia” “The Infancy Of Public Relations, As Strangled By Ron Bass, Anna Phelan Hamilton And Mira Nair In The Crib.” The script, lacking the write stuff, is only the first of many unaccountable missteps. Icons artlessly arrayed become mere clichés: The young Amelia, fated aviatrix, running on Kansas farmland—blue eyes, large freckles and big teeth turned upward with unabashed awe as a small plane chirrs just overhead, green grass and Amelia’s red sweater blending like a confected palette from “Amelie.” But there’s no pixie dust or romance once she’s grown, only Hilary Swank’s open-eyed smile, full-lipped, sometimes fuller-freckled from tan, seemingly without makeup. Do we learn enough, seeing her eyes creased as she peers from her plane above the veldt to admire Oryx at play below? Swank’s features are earnest, open, naïve, impenetrable, dull. As costume design and strawberry-blonde emulation of Earheart’s features go, it’s powerful. There’s a surfeit of taffeta and tweed, khaki flight suits and leather breeches containing Swank’s cat-in-burlap-sack buttocks with cheeky, starry voiceover instead of any confluence of fascinations, vision and aplomb. It’s stately pluck, myth-making of its era, from a pocket-sized magazine rather than a stalwart broadsheet. Then the characters speak. Then the wrong passages of her life are portrayed. Rather than capturing the difference of a woman—there is an admirable lack of judgment about her open relationships—being strong before her time, the story becomes a parable about the birth of the sell-out, of twentieth-century public relations, and not a very good one. Mad Men, genteel Amelia. Shots of shiny planes moving into another bank of cumulus bore the first, second, third times. Stuart Dryburgh’s images, as stills, are burnished sweetness: A lushly illustrated companion hardcover  (Rizzoli/Universe, $35), combining bits of the script with production stills and photographs of Earhart, is a marvelous eyeful, like the volume produced to go with “The Namesake.” But in “Amelia,” especially, an eye for single, singular images does not prompt drama. In her introduction, Nair says the film is “about memory and dreams and ellipsis,” but unfortunately, large swathes of the movie, especially the genteel relations between Earhart and her husband-publisher G. P. Putnam (Richard Gere) are what would slide neatly into the ellipses of another director.  Gabriel Yared’s (“The English Patient”) emphatic, old-fashioned yet slightly desperate score hails in from distant Minghella-ville. Bass (“Rain Man”) and Phelan (“Mask”) based the screenplay on “East to the Dawn” by Susan Butler and “The Sound of the Wings” by Mary Lovell, and “Amelia Earhart: The Mystery Solved” by Elgin Long. With a character based on the young Gore Vidal and Cherry Jones as Eleanor Roosevelt. 110m. Anamorphic 2.40 widescreen. (Ray Pride)