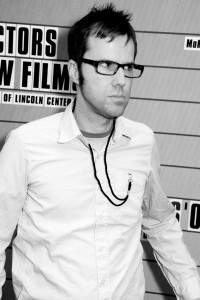 “I’ve put the Pixies on for our chat,” he types from Texas; Syd Barrett sings “Dark Globe” in the café where I stare out onto the avenue. Byington’s latest smart comedy of discomfort, his third feature, “Harmony and Me,” which benefited from development at the Sundance Institute, debuted in the spring at New Directions New Films in New York City to strong reviews. Austin thirtysomething Harmony (Justin Rice from Bishop Allen) works in an office and feels the pangs of a recent dumping by his girlfriend, Jessica (co-producer Kristen Tucker). Harmony is obsessed. No one wants to hear it. His pain and anger move toward making a song. Along the way, Byington’s wry comic precision and crisp characterization is matched by a gift for laidback yet kaleidoscopic, naturalistic performances getting from actors and non-pros alike.

Byington is self-distributing, opening for a week at Siskel, and was on a panel at the Austin Film Festival on Sunday about comedy writing. Is that your area of perceived expertise? I ask. “Yes, but I have no training and little expertise. I look at someone like Woody Allen who wrote jokes for ten years before he made his first movie. But he was unavailable, I think.” At AFF, writer Matthew Weiner had been on a panel, and Byington and I talk about what he calls the “lucidity” of “Mad Men,” which leads me to recall a New York writer who once observed you’re not truly an adult until you hurt someone, you’re knowing you’re hurting someone emotionally. “My day began with a text from a girl claiming I’d been bragging about sleeping with her. I must have looked like a cartoon character when I read it. Eyes popped/jaw drop.”

I apologize in advance for describing his last two features as “intelligent.” “There are worse accusations, like the one that began my day.” His previous feature, “Registered Sex Offender,” is a razor-sharp comedy partly about hypocrisy, yet it’s a drab-looking movie, lo-lo-fi. “Yeah, I shot it myself, no idea what I was doing at all. Beyond Lo-Fi!” Anish Savjani, his new producer, who’s worked with Joe Swanberg, “strongly urged me to work with a cameraman. It worked out well in the end, I think.” On “RSO,” they shot for eighteen months, “Harmony” took eighteen days. “I told the editor that I would not bury him with footage, and started strong, but ultimately did not make good on that.”

One of the keenest parts of “Harmony” is how the character keeps trying to reduce his pain to storytelling, as if shtick or a song could make it all go away. He’s a little pathetic but increasingly funny, like someone talking about the dream they had last night, but every day. “Yes, trying to get your story straight. It’s like there are competing versions, but you’re concocting all of them in your head. ‘Please listen to my broken record.’ A man walking down the street, struggling to carry one of those little record players, that plays 45s, stopping people. I don’t know if there’s a digital analogue. I like it in ‘Trust’ when Martin Donovan is getting drunk and talking about analogue recordings.”

We talk about something equally traditional in ninety minutes of zigs and zags: comedy writers like Allen and Mel Brooks and James L. Brooks with a lifetime of experience behind them. “Guys like that worked so hard in these comedy factories for so long before they started making movies, I don’t think people necessarily understand that. I love that James Brooks worked for so hard for so long before he made ‘Terms’ and ‘Broadcast News,’ so you [get] a very sophisticated understanding of comedy at play in those movies and outstanding actors doing the best work of their lives. [“Mutual Appreciation” director Andrew] Bujalski and I prefer talking about ‘Broadcast News’ to any other subject. The commentary for ‘Terms’ is a film school in and of itself. His laugh is music.”

But in “Harmony”‘s plot, Byington plays out the musical element carefully. “I was cautious about Justin, I think.  I did not listen to his music, and cast him for his demeanor. When he got to Austin he gravitated toward instruments, and the piano lesson stuff [in the story] was organic, because he wanted to work on the things he works on in the movie.”

At Michael Moore’s Traverse City Film Festival in late July, Byington was given the ominously named “Stanley Kubrick Award.” Is it a baby monolith? “Is that an answerable question? I think it helps, that it means nothing. I was actually talking to [Sundance mentor, “Sideways” co-screenwriter Jim] Taylor about it, and told him about it, and he congratulated me, and I said, ‘Well, it feels sort of meaningless, do all awards feel that way?’ and he said, ‘No, the Academy Award actually doesn’t.'”

“Harmony and Me” opens Friday at Siskel. Byington will appear at Friday’s 8pm show and 3:15pm and 8pm Saturday.  Here’s the trailer.