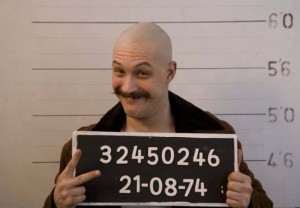 Some things are best kept inside. Tom Hardy is the wickedly self-satisfied center of Nicholas Refn Winding’s “Bronson,” an eye-pleasingly arty portrait drawn willfully from the true life story of a man sentenced as a boy to seven years in stir for a failed robbery of a British post office whose sentence mutates into over three decades in confinement, much of it in solitary. His name was Michael Gordon Peterson, the system calls him the U.K.’s most violent prisoner, he calls himself “Charles Bronson.” He’s an artist, “Bronson” suggests, performance art with a jab and a gush. Chaos and disarray are his glee. He fancies a riot. Much as in Eric Bana in Andrew Dominik’s “Chopper” (1997), Hardy captures both resilience and denial in the story of a fierce and fiercely deluded convict. Thrashing a near-operatic palette (shades of the rich theatricality of “Il Divo” and “Gomorrah”), Winding finds a different, but equally agitated contemplation of violence from his “Pusher” trilogy of gangster movies on the streets of Copenhagen. The Danish director’s latest, “Valhalla Rising,” which debuted and was sold at Toronto International, is a Viking battle epic, a dream project made possible by this gaudy, violent, completely entertaining lark. The cinematography by Larry Smith (“Eyes Wide Shut,” Winding’s dour 2003 “Fear X”) is poisoned candy, a ribald succession of bruises and ancillary damage. The music’s special, too; there’s a New Order cue that pops. With Matt King, Terry Stone, Amanda Burton, Hugh Ross, Jonathan Phillips, Kelly Adams, China-Black, Joe Tucker, Edward Bennett-Coles. 92m. (Ray Pride)