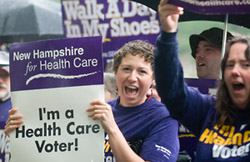 “Labor Day” is the sort of well-intentioned documentary that seems naked without an accompanying panel discussion. Veteran nonfiction director-producer Glenn Silber (“The War At Home,” 1979, ABC’s “20/20”) follows the members of the SEUI, the two million strong Service Employees Interrogational Union through their involvement in the 2008 presidential campaign and their role in the election of Barack Obama. They still wield strength, which is why they’re still fielding attacks from those who oppose the involvement of Democrats in politics. I’m copacetic with most of the ideals on screen, but flat filmmaking and a barely inflected spirit of rah-rah-rah make this more a motivational or training item than a memorable nonfiction entry. It could as well be called “Look at What We Did!” Interviewees include politicians Bill Richardson and Dennis Kucinich, Ted Koppel and mainstream correspondents from Time and Newsweek. The SEIU reportedly holds partial copyright, while Silber claims final cut. 76m. (Ray Pride)