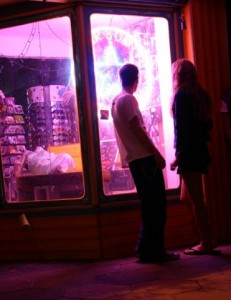 Stark staring strange yet somehow nothing out of the ordinary, unblinking at the quotidian: that’s the kind of observant, innovative, mood-ridden dramas I’m always longing to see come out of regional filmmaking. Chris Fuller’s stark, fierce, rhapsodic “Loren Cass” was completed in 2006 but only released now as the filmmaker outlined a way for a distributor to slide his micro-drama into the current battered marketplace for smaller films. Fuller wrote his script at 18, and was 21 when he shot his story of three teens in the aftermath of 1997 race riots in St. Petersburg. Key to the young filmmaker’s telling is the eye of cinematographer William Garcia, who followed the grimy complications in supple, expressive super-16. Together, they forge a grunge vision of a downcast world, fallen before its maturity, pinioned somewhere in the ruint forest of photographic memoirs like Richard Billingham’s “Ray’s A Laugh,” William Eggleston’s “Stranded in Canton” and the effulgent beauty of Nan Goldin’s C-print raptures of degradation. Race, sex, fists and booze stew in a wide-angle intaglio of the Sunshine State. Color and sound: there are layers upon layers of detail here, lapping oceans of observation. If a guy started making a lyrical mosaic of calm and fury like this at 15, I sure want him to make more. See something great. It’s in it. With Fuller, Kayla Tabish, Travis Maynard, Jacob Reynolds, Mike Glausier, Din Thomas, Blag Dahlia, Keith Morris, Omali Yeshitela, Matthew Bistok. The title has an explanation, but is essentially a non sequitur. (Disclosure: “Loren Cass” was nominated in 2009 for Best Film Not Playing at a Theater Near You by the IFP’s Gotham Awards; I was on the jury.) 83m. (Ray Pride)