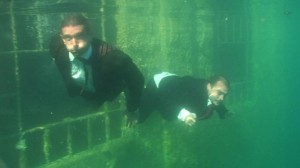 Andy Bichlbaum and Mike Bonnano are the noms de hoax of the Yes Men, performers, writers and directors of the political provocations collected in “The Yes Men Fix The World.” Like its predecessor, “The Yes Men,” directed by Chris Smith, Dan Ollman and Sarah Price, the filmmaking makes less of an impression than the sustained gall it takes the duo to pull off the activist stunts they do. In the past week, for instance, they held a press conference, pretending to be representatives of the 300,000-strong Chamber of Commerce, making a U-turn on global warming; an actual C of C representative broke up the proceedings by demanding proof of their indentities: he wanted business cards and he wanted them now. Like rock ‘n’ roll, it’s kind of hard for even the best filmmaking to capture the sort of happening these very-merry pranksters are interested in. They’re creepily evocative in the details they come up with in the suite of six Swiftian stunts on show here, such as Bichlbaum’s impersonation of a Dow Chemical spokesman on BBC, where, as a P.R. spokesman named Jude Finisterra, announces the company’s assumption of all responsibility for the infamous Bhopal chemical plant that killed thousands. Jude Finisterra? I believe anything he says! 85m. (Ray Pride)

“The Yes Men Fix The World” opens Friday at the Music Box. At Sundance 2009, I posed the  question, “Why is capitalism funny?” to Yes Men Andy Bichlbaum and Mike  Bonanno (video at the links).