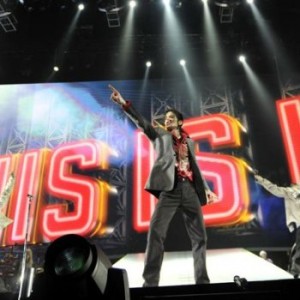 Is “This Is It” all there is? A dog’s breakfast of scraps from on-the-fly, sloppily shot rehearsal footage of his not-to-be final tour, “Michael Jackson’s This is It” has excited some first reviewers enough to suggest the movie’s good enough to be nominated for Best Picture. Unless you really, really care about Michael Jackson, it’s not much of anything: it’s hushed hagiography as sandpapered as Jackson’s own nose, less documentary than séance. It’s also debt warmed over: On the verge of losing his many possessions after decades of incautious spending, Jackson had to do something as creditors circled. A tour, with multimillion-dollar advances from mammoth tour promoter AEG, was the choice. Interest must be paid. But the final evidence of that choice, compiled by director and “co-creator” Kenny Ortega, with the furious assistance of editors Don Brochu, Brandon Key, Tim Patterson and Kevin Stitt, “MJTII” would surely embarrass the late ditherer. As Vladimir Nabokov reputedly said, “Only ambitious nonentities and hearty mediocrities exhibit their rough drafts. It is like passing around samples of one’s sputum.” (Nabokov’s heirs, three decades on, are about to publish his unfinished final novel, having allowed the sputum to age and mellow.) A difference scatological reference came to mind walking out of the theater.  What’s the line from “Withnail and I”? “It feels like a pig. Shat. In. My head!”

Like an extra for a ten-DVD set, “MJTII” is weightless, with so little there, aside from numbing necrophiliac fascination, it’s possible to read almost anything into it. (It may also be why reviews seem either very, very forgiving, or very, very cutting.) Even though Jackson is only in walk-through mode, not quite ready to subject his long-unused voice to strain before a fifty-date stand, there’s no way of knowing precisely how much audio multitracking and pumping-up of soundtrack makes this assembly even vaguely listenable. But keeping his energy level down means the skeletal man with the damaged husk of a face looks like death in a hurry, a scarecrow wanting to be found out as the man behind the mirror, all-in in love with miserable death. Befuddled, babbling, not a single utterance shows verbal coherence or acuity on Jackson’s part. If this is the best of the desultory footage, it’s hard to imagine just how shatteringly sad the other hundreds of footage must be. “MJ,” as he’s usually called, whines at one point, “The value would be greater! If you let it… rumble!” When he can’t hear something, it’s missed “my own oratory ears.” A song’s bridge needs two or three additional notes, but he can’t just say that, he stammers, mumble-splutters, “you gotta move it so it has to simmer, bathe it in the moonlight, let it simmer.” He’s impatient with a soundcheck, he doesn’t want to be doing it. Petulantly, he says he wants it to sound “like the record, the way the audience hears it.” “Yes, Michael,” everyone says. “Yes, Michael.” Then asking him another way, another way, firm, simple, patient. “MJTII” opens with dancers weeping through their eyeliner for being in Jackson’s sainted presence. Musicians say things like, “It’s remarkable, there’s some genius stuff going on here, y’know,” and then there’s a cut to a broken man trying to make sense of it all.

“God bless you” and “I love you” are common too, the sort of things murmured by the elderly as they feel the life force draining away. The indifferently shot footage was for Jackson’s own use, and most of it does him no favors. Ortega co-stars, a glib, sinister presence, beaming, patting his belly, tossing bromides like bread rolls, leaving in footage of himself saying “rock ‘n’ roll!” a lot as well as one odd moment where his shirt rides up and contrasts his great girth and the rim of his boxer shorts to Jackson’s anorexic form. (They’re sharing some kind of joke about “stewardesses.”) We witness a mutilated man, a shriveled soul, die. For a man with a Christ fixation, this is the final crucifixion. And as a film portrait of all-American hubris and failure, it’s up there with “Overnight” and “American Movie.” Still, I’d like “MJTII” to make many, many millions of dollars, not in the spirit of marketers like the late William Castle, but because I believe in theatrical exhibition, and I’d like theatrical exhibition to survive, and any great, runaway, fluke success may help. A quarter-billion dollars would be good. 111m. (Ray Pride)