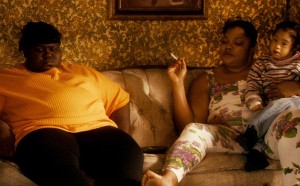 Some movies sound deadly, and it’s amazing when that’s all to the good because then the film can take you by glorious surprise.

That’s the case with Lee Daniels’ “Precious, Based Upon the Novel ‘Push’ By Sapphire.” Set in Harlem in the mid-1980s, it follows Precious (Gabourey Sidibe), an overweight teenager with a Down Syndrome child who’s been repeatedly abused sexually by the boyfriend of her resentful mother (Mo’Nique). At first, as Precious is thwarted in her attempts to educate herself out of agony, the film’s stylistic choices seem as eccentric and naïve as its protagonist, yet “Precious” grows in assurance and its gestures of character growth toward demonstrating how a generational cycle of abuse can be cut moves toward an ending that can only be called earned.

Precious’ world is one you’d want to imagine doesn’t exist more than you want to imagine it; it’s America as a second language. A cruel place where dignity is the one currency you’re always denied. The cast includes Mariah Carey as a not-glamorous social worker, but Mo’Nique’s turn playing a monster, a master of abuse, a mother who’s turned a gimlet stare to her own child with simmering hatred. As a comedienne, she adroitly captures the character’s terrible self-pity. But the star, of course, is the 26-year-old Sidibe. Much will continue to be written about her.

During the Chicago International Film Festival, we meet at a Loop hotel suite, and Daniels and Sidibe sit close on the plush couch, each clutching a huge pink velour pillow. After a screening the night before, they had clutched each other’s hand during a heartfelt Q&A.

Textures clash in “Precious.” The movie is a jigsaw of choices until rhythms untangle themselves. Then Daniels seems to discover how to make a movie as he goes along; I mentioned Julian Schnabel as someone who had fashioned a rude stylistic vocabulary, which elicited an unexpected confession. “I think I’m taking that as a compliment. Is it a compliment?” It sure is. Turns out they’re not just friends, but Daniels wants to grow up to be Schnabel. “Out of his mind! And no one will tell you that’s he’s better, than him. That’s why I love him. Because he has the power that I want to have. He has no problem saying, I go, ‘Julian! How’s your next piece?’ ‘Brilliant! It’s a masterpiece.’ I go, ‘Julian, no, really, how is it?’ ‘Didn’t you hear me? I said it was a masterpiece!” He says it… and it is a masterpiece! I love him and I want to be him. He directs like me, too, often—”

Sidibe interjects, “In a bathrobe?” She giggles. “Unlike me,” Daniels says, “he takes it even further. At least I put on these clothes, I put on these clothes for journalists—” Sidibe says, “You do the glasses…” [like Schnabel’s oversized horn rims] “Everything! I’m telling you something, he’s my bl— It’s a very subliminal thing. I go, I direct in my pajamas, I direct in my bathrobe, everything. But at least I have respect for journalists. I’m too afraid. I’m not that ballsy. I won’t do it. I put on clothes for you.”

Daniels says there aren’t many more screenings of his “baby” where he’ll be able to introduce it and give permission to laugh. “I can’t anymore. My baby is up and going. A lot of people, not just white people, but conservative blacks, very wealthy African-Americans will watch it and go, y’know, ‘What is so funny?’ Truly! And I go, ‘What… is not so funny? This is really some funny shit!’ We laughed doing it! Mo’Nique laughed doing it. Sapphire, the writer of the book, was hysterical. She laughed! There was a moment when she was on the floor. Okay. This is when I knew that I had hired the right girl. [There’s a scene with boys on the street where] she’s pushed on the floor, right?'” Sidibe snorts. “She’s pushed on the floor, I’m on the fuckin’ floor, laughing, I’m laughing my ass off. I’m laughing… My white crowd, the crew’s, ‘Oh he’s just so rude, he’s so disgusting, what kind of director is he, he’s vicious,’ and I’m fuckin’ on the floor, laughing.”

“Oh I remember that day,” Sidibe says. “And they say, ‘Are you happy now? Look at her. She’s crying!’ Gaby’s like this… [He hunches his shoulders, seems to sob].” Sidibe laughs. “I walk up to her and Gaby’s like… laughing! And I say, what are you laughing at? She goes, I’m a fat girl on the floor, what do you think I’m laughing at?’ She got it.”

Daniels’ philosophy in dealing with downbeat, potentially deadly material? “Feel free to laugh. You have to laugh! You need room to breathe. Any place you can make me laugh, please, please, God, make me laugh.” And he smiles, flashing large brown eyes.