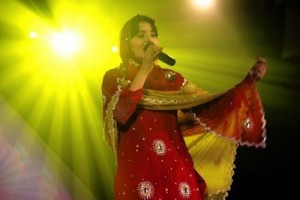 Make a list of what you’re willing to die for. Think hard. Does it include “American Idol”? In Havana Marking’s “Afghan Star,” “Pop Idol” comes to Kabul. After thirty years of Taliban rule, with music, television and most merriment outlawed, one of the runaway successes in that broken land has been these competitions. Eleven million Afghans watch. The show’s director and host, Daoud Sediqi, bubbles with showbizziness, such as wearing sunglasses, but he’s also filled with optimism and hope about his endeavors. But passions, ethnic and moral, die hard. The headscarf of one contestant, Setara Hussainzada, parts a little and she even dances, slightly. Indignation and fury ensue: a male contestant even says “She should be killed.” Marking, a British television veteran, directs with assurance and her use of the show as a parable for contemporary Afghanistan is understated but certain. She tells a compelling story without getting in its way. “Afghan Star” won the directing prize and the audience award in Sundance 2009’s world documentary section. 87m. (Ray Pride)