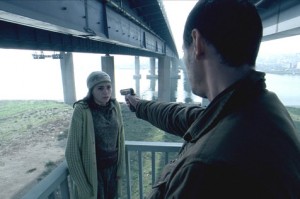 With strong affinities to Roman Polanski’s “Knife in the Water,” Abdullah Oguz’s “Bliss” is mainstream bourgeois melodrama, in contemporary Turkish settings, both cities and villages. The clash of ancient and modern is as old as the Anatolian hills, and patriarchal urges lead to terrible things. But strong performances in the simple story are grounded in Bosnian cinematographer Mirsad Herovic’s bold images and an intoxicating score by Zulfu Livaneli (who also wrote the 2002 novel on which the movie is based). The sea glistens as the characters simmer. With Talat Bulut, Mustafa Avkiran, Murat Han and especially noteworthy, Özgü Namal as a young woman asserting herself boldly in the modern world.  105m. (Ray Pride)