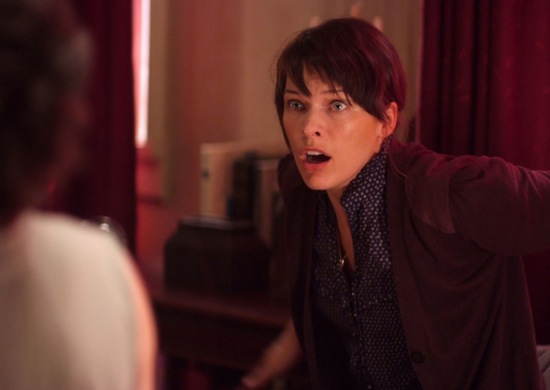 In a generous epistemological gesture, writer-director Olatunde Osunsanmi tells us: “It’s Up to You to Decide…” What’s up in the night air are Sumerian-speaking Alaskan-abducting owl-impersonating aliens. They interrupt slumber in Nome, leaving victims with nightmares and shoulder scars. Suicides ensue. Milla Jovovich plays psychologist Dr. Abigail Tyler. Standing on a country road as the camera does 360s around her, Jovovich tells us at the start her own name and says that her character’s name is an alias for an actual psychologist portrayed in the film. (Numbskull skeptics at Imdb.com confirmed that the “Dr. Abigail Tyler” is in fact fictional, citing as sources Alaska’s state licensing examiner, the director of the Alaska Psychiatric Institute and the president of the Alaska Psychological Association.) Tyler videotapes Alaskans under hypnosis. They convulse hard enough to break their own bones, as they voice cryptic static. Another woman plays the real woman who originally videotaped hypnotized abductees. She also appears on a university TV interview show hosted by Osunsanmi. Videotapes in the film are marked as authentic by italicized inserts in brackets: “alias,” “name omitted,”  “address withheld,” “actual audio.” “The Fourth Kind” is no riff on Brechtian alienation of the fourth wall, with all its split-screen juxtapositions of the real and recreated videotaping sessions. In this inane thriller, characters can believe in aliens, but when an alien claims to be God, the good people of Alaska draw the line and suspect a God-impersonator. Osunsanmi offers film reviewers a “Sampling of Actual Reported Alien Activity in Alaska” yet withholds all the actual alien activity in that state. Omotic-speaking Oklahoman-abductors might be next. With Will Patton, Elias Koteas, Corey Johnson, Hakeem Kae-Kazim and Daphne Alexander. 98m. (Bill Stamets)