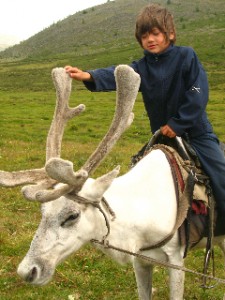 Director-cinematographer Michel Orion Scott tracks an autistic Texas boy to Outer Mongolia: his open-minded parents wonder if shamans on the steppes might heal their Rowan. Or at least get him to stop pooping his pants. “The Horse Boy” is narrated by Rowan’s long-haired dad Rupert, a former horse trainer turned advocate for indigenous peoples’ land rights. Rowan’s mom Kristin is an associate professor in the Department of Educational Psychology at the University of Texas. “Self-compassion” is her research specialty. Talking heads include the director of the Autism Research Centre at Cambridge University; an anthropologist who penned “Unstrange Minds” about his autistic daughter (his grandfather founded the University of Chicago’s psychiatry department) and Dr. Temple Grandin, the autistic author of “Animals in Translation: Using the Mysteries of Autism to Decode Animal Behavior.” “The Horse Boy” documents the hell Rowan endures with his endless tantrums. It’s hell too for his helpless parents. But a horse calms him down. This inspires a 2007 trip to seek out traditional healers among reindeer herders. One divines a negative energy emanating from Kristin’s late, mentally ill grandmother. This is a home video of a family traveling far for therapy on a hunch. You cannot help but cheer, if not chant, for a sunny outcome. Yet I have never seen a documentary or drama shot in Mongolia that offered such overcast skies and lackluster vistas. 93m. (Bill Stamets)

“The Horse Boy” opens Friday at the Music Box.