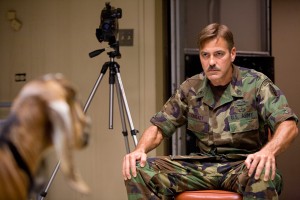 “This is a true story” is how Jon Ronson began his 2004 nonfiction book about a secret U.S. Army project started in 1979. “More of this is true than you would believe” is how a comic film begins that’s based the book and borrows its title. U.S. soldiers trained under a New Age renegade played by Jeff Bridges who experimented with paranormal, extra-sensory techniques, including assassination-by-staring. Goats were his guinea pigs. Screenwriter Peter Straughan says he worked from Ronson’s reporting without meeting the original storytellers. Unfortunately, this surefire material fizzles with a clunky flashback structure built into a reporter’s yarn and road movie. Grant Heslov directs with less than shapeshifting élan between tones and genres. Reporter Bob Wilton (Ewan McGregor) teams up with retired goat-starer Lyn Cassady (George Clooney) for an adventure in Iraq that recalls “The Hunting Party.” Thanks to “remote-viewing” or blind chance, they end up at a desert base where both Lyn’s mentor and his nemesis now work as private contractors. Tactical LSD catalyzes the liberation of goats as well as two-legged detainees. As a satire of militarized consciousness, “The Men Who Stare at Goats” is not remotely psychoactive. With Kevin Spacey, Robert Patrick, Stephen Root, Stephen Lang and Waleed Zuaiter. 95m. (Bill Stamets)