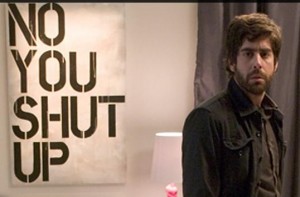 “Bartleby” director Jonathan Parker and his co-writer Catherine di Napoli team up for a safer, less successful comedy with social commentary that’s set in New York’s Chelsea art community. Adam Goldberg (“2 Days in Paris,” “Entourage”) plays Adrian, an unlovable, atonal asshole who composes pretentious crap. His brother Josh (Eion Bailey) paints soothing pastel canvases bought as hotel-chain decor. Madeleine (Marley Shelton) runs an art gallery that deals Josh’s corporate art from the back office. Out front, she showcases pretentious crap by conceptual artists. Madeleine and Josh become lovers, then haters. Her loft sports a painting with four words: “No/ You/ Shut/ Up.” One of her star artists states: “I don’t know what I want to say, but I think I want what I want to say to go without saying.” Parker and di Napoli may like their caricatures too much to skewer them, but the true undoing of “(Untitled)” is its lack of imagination in mocking New York’s art and music scenes. The faux concerts and exhibits are too much like their intended targets. Only dumber. And not in a comically deconstructive way. Just dumber. To be fair, most films that aim to mock other films—avant-garde, foreign, or action blockbuster—likewise lack the wit to rip their own kind. With Lucy Punch, Vinnie Jones, Zak Orth and one Ptolemy Slocum. 96m. (Bill Stamets)