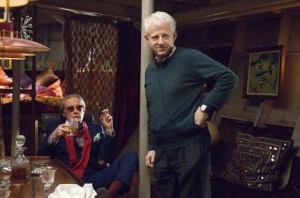 Richard Curtis is happy even if you’re not.

“I’m a great believer in happiness,” says the 53-year-old writer of “Blackadder” and “Notting Hill” and writer-director of “Love Actually” and “Pirate Radio” on a Monday stopover in Chicago the day after his birthday. “And, if like me, you’ve had a happy life and you can try and portray it and send people out of the cinema joyful, that’s a great thing. And I don’t think at all that happiness is sentimental, or unrealistic. All over the world, there are people who are having fun with their friends, falling in love, having a good time, loving rock ‘n’ roll, and only about two places in the world are there serial killers planning to murder single mothers in apartment blocks. For some reason or other, when you have these absolutely gruesome things, they’re called searingly realistic, but they happen only once a decade. Whereas if you make a movie about friends falling around and people losing their virginity, that’s called unrealistic. Whereas, it’s happening millions of times in every city around the world. I’m interested in talking about that stuff.”

Curtis’ latest confection, “Pirate Radio,” (called “The Boat That Rocks” in its twenty-minute-longer British release) celebrates an era in the 1960s when British pop music was breaking out while broadcast radio remained staid and stuck-up. Entrepreneurs imported Australian and American deejays and moored them offshore, with pirate stations beaming the latest sounds to a grateful nation. The boat’s owned and managed by dour exclamation point Bill Nighy, and the teeming ensemble-cast crew includes a sweetly louche Rhys Ifans (“In ‘Notting Hill,’ we had him the world’s ugliest man, and here? That’s what acting is,” Curtis says) and Philip Seymour Hoffman, as well as handsome Tom Sturridge as the young nephew of Nighy, sent for a summer’s escape on the water, where drugs, raw language, music and the losing of virginity will be in the mix. Curtis says he looked at “Animal House” and “M*A*S*H” for inspiration, and the “Carry On, Deejays” result shares a disdain for authority, with ever-doughy Kenneth Branagh on hand as their governmental prosecutor with a comic villain’s near-Hitler toothbrush of a mustache, aided by a bureaucratic dogsbody with the unlikely name of “Twatt.” “Actually, the funny thing about both those movies, when I look back on them, is that neither of those movies took their authority figures seriously. Which is particularly quite interesting in ‘M*A*S*H,’ which is quite a realistic film, but beyond realistic characters are the senior ones, aren’t they? There’s the general, only wants to play football. When I felt, should I be taking Ken more seriously, I thought, if it’s all right by Robert Altman, it’s all right by me. What I didn’t want it to have sort of a broken-back film, where every time we cut back to the politics, it was suddenly just dull for five minutes.”

Longtime Curtis colleague Emma Thompson is on hand as Sturridge’s mother, but her scenes are kept at a remove from those of her ex, Branagh’s. “I checked! I checked with her it was fine, and it was fine. In fact, I remember when she did her ADR [dialogue looping], she came in and asked if she could see some of Ken’s bits, and roared with laughter at Ken’s mustache.” A beat. “And his performance, I’m sure.”

All the way back to “Blackadder,” Curtis has enjoyed showing men full of banter and bluster. “I think that’s right. I think that in fact this one might be a mixture of the two. I do recognize that a lot of my films seem to be about, or interested in friendship, and the way friends talk. In fact, ‘Four Weddings & A Funeral’ and ‘Notting Hill’ are really as much films about a group of friends as they are about Hugh’s relationship with the girl. Actually, more screen time is there for the friend bits than there are for the girl bits. So I like that. And I think about friendship. And when I think, can I write funny, well, if I can be as funny as my friends and I are, and I’m sure, you and your friends are, when you’re slightly drunk at ten o’clock and pursuing jokes both general and particular. That’s sort of the most pleasure in life, and in a way, I’m just trying to reproduce that ease and flow of the way that friends and men talk. I’m also interested in how women talk. But if you’re going to do ‘Pirate Radio,’ then you’re slightly stuck on the girl front!”

As a career writer turned director, I ask, what are you most secure about and most insecure about? “Wow. Um. I think I’m quite secure about editing, oddly enough. I’ve always done that. A couple of my films I’ve worked on have started off really badly. Like the first time we showed it, it was completely skewed. I have quite a lot of faith that if you just go on working, you can fix, or oddly enough, get back to where you wanted to be. I really do believe in doing the movie three times, the writing, the directing, the editing. You’re trying to do the same thing, but you get to the same place by a different and unexpected route. One of the things about having written for a long time is you don’t despair when you’re writing. If I have a day in which one thing, good thing, has come out, I think that’s a triumphant day. Whereas slightly more worried writers will think, ‘Oh god! I’ve worked all day, twenty pages and there’s only this one scrappy little thing!’ Whereas for me, y’know, that’s a triumph.”

And insecurities? “Um. What am I insecure about? Oh, I don’t know! My ability to get up in the morning when we’re shooting. I was insecure about this shoot insofar I thought I’d get seasick, but it turned out that the boat was big enough not to worry us.”