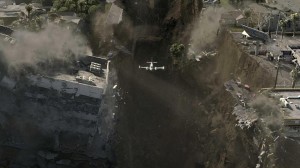 Is Roland Emmerich hoping to suggest a Fritz Lang fueled on Ecstasy and poppers?  The Teutonic apocalypticist has topped his customary grandiloquence with bursts of grandeur in the 158-minute “2012,” a bravura, breathtaking, ridiculous, assured, intermittently political, berserk masterpiece about the end of the world. As a director-producer-SFX-house-owning Euro-auteur, he has no parallel. (Timur Bekmambetov needs to notch a few more conflagrations in his belt.) The economic critique leveled against form-follows-function disjuncture in movies like “Fight Club” could escalate to Titanic scale against this pinnacle of Emmerich’s appetite for destruction. As lit and framed by Dean Semler and designed by ranks and ranks of designers, Emmerich’s provocations aren’t meant to capture the hushed, stoppled intake of breath upon encountering a finely ruined world. There’s gallery-drowned influence that’s only grown with time. Some of his images hope to sleep cheek-by-jowl with work like Maurizio Catellan’s “La Nona Ora” (The Night Hour), in which a Pope has been slain by a small, perfectly aimed bit of meteorite. Amusingly, Emmerich has shown off the yields of his profits: he’s made his London home into a gallery of boldly political art, some commissioned. He wears the galleristic influence with confident glee. He adds more and more politicized sarcasm to the kind of enterprise that was considered programmatic, say, “Gone in Sixty Wonders of the World.” Emmerich is a mephitic prankster and the perfume comes from a perfect nose, a perfect nose for what he does. With John Cusack, God bless ‘im, Amanda Peet, Oliver Platt, Chiwetel Ejiofor, Thandie Newton, Danny Glover, Patrick Bachau. 158m. Anamorphic 2.40 widescreen. (Ray Pride)