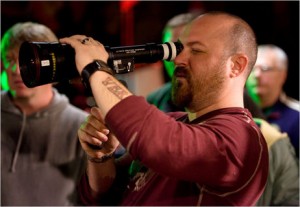 If anything, “Boondock Saints II: All Saints Day” proves you have to be careful with a loaded camera, it might go off. Or, as a character insists in one of semi-literate writer-director Troy Duffy’s relentless succession of supposed comic malapropism, “This ain’t rocket surgery.” Duffy’s a pistol himself, noted for instilling the fear of God in interviewers who question his fuckin’ intelligence and his fuckin’ smarts and especially how he’s depicted in that muthafuckin’ “Overnight,” where dudes who used to be his best friends, as a criminal says in “BS2,” “These sonsofbitches prison-fucked us up the ass and then wiped their dicks on our grandmothers’ graves!” Connor and Murphy MacManus, the two assassin brothers (Sean Patrick Flanery, Norman Reedus) who went into hiding after the murders in the first installment, are drawn out years later by the murder of a beloved priest. Judd Nelson, who seems to have been repeatedly thwacked in the head by Al Pacino’s lighting double, plays the mobster who’s behind the plot. Sanctimonious, sacrilegious, sentimental vulgarity ensues in with a dick-swinging lack of embarrassment. The worst tragedy of this entire ruckus? Nobody on screen is acting. No offense to the late Jules White, but many scenes play out like Three Stooges routines, if every character were Shemp. Line deliveries are uniformly awful, unfunny, and to a man and woman, nobody ever, ever, ever says “fuck” in a way that enriches the rhythm of the unspeakables they’re speaking. Duffy also seems to have seen only one movie in his life, one called “Boondock Saints.” Drawing on a limited visual vocabulary, including turn-of-the-century John Woo-style gun battles with a taste of “The Matrix”‘s “bullet-time,” the gaudily pretentious director’s most common device is inconsequential pulse faces to black and back to image within scenes. It’s almost like the kind of odd fixation you’d see from a teen discovering the “Ken Burns Effect” in his newly pirated copy of Final Cut Pro. “How the fuck would you know?” A character asks. “Fuck you, I know shit,” is the correct reply, this penned by a man who has characters listening to Boston AM radio on a freighter at sea and offers a close-up of a man’s bottom clad in a poop-filled pink “European cut” Speedo. There’s more invocation of fears of anal violation than a month of Rush Limbaugh’s rectal metaphors that includes a disdain for “gay, gay, gay, faggot shit.” Or is that a cocky embrace? What’s the line from “Withnail & I”? “It feels… like a… PIG… shat in my head!” Yes. Yes, it does. With Billy Connelly, Julie Benz, Peter Fonda. (Amusingly, considering all the expended firepower, Fonda’s role takes place entirely seated in one chair in one location.) 117m. (Ray Pride)